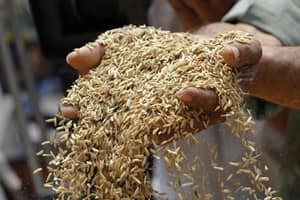 Wholesale inflation soared to a 23-month high of 3.55 per cent in July as vegetables, pulses and sugar turned costlier

“Pradhan Mantri Fasal Bima Yojana is a deception. It aims to benefit insurance companies and not the farmers,” Kumar said while addressing a function of newly-elected panchayat representatives here.

Since the Centre as well the state and farmers have to share premium of the crop insurance, the scheme should have been named as “Centre-State Kisan Fasal Bima Yojana”, he reiterated.

After a slugfest over naming of the scheme, the Bihar government had two days back agreed to implement it on an experimental basis in the kharif season.

On the criticism for stringent prohibition law, the CM said the legislation was “wrongly advertised” by people affected by closure of the trade.

“I humbly request those criticising the legislation to come out with valuable suggestions if there is some lacunae in the new liquor law to remove them,” he said.

The CM expressed firm commitment towards complete ban on liquor and categorically said “there is no question of retreating my steps.”