The NIA has launched a probe to track the funding of militants in Jammu and Kashmir by their sympathisers abroad who have started using bank accounts of ordinary citizens to route money to finance their activities in the restive state. 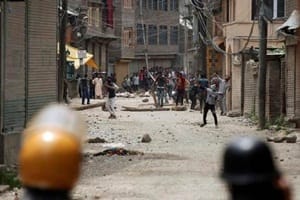 A police spokesman said barring five incidents of stone pelting in Anantnag, Shopian and Bandipora districts, the overall situation in the Valley remained peaceful and under control. (Reuters)

The NIA has launched a probe to track the funding of militants in Jammu and Kashmir by their sympathisers abroad who have started using bank accounts of ordinary citizens to route money to finance their activities in the restive state.

Running the risk of getting caught by the Indian security and intelligence agencies, the militant organisations and their sympathisers have begun jettisoning the hawala channels for transferring money and are wooing Kashmiris who travel to gulf countries for work.

After thoroughly brainwashing them, the individual is persuaded to receive money in his bank account which is then used for financing terror activities, official sources said.

One per cent of the money received is left in the bank account of the individual by their ‘handlers’ based abroad as commission, they said.

The money so deposited in the bank accounts is withdrawn within days.

Sources in the anti-terror probe agency said discreet inquiries showed that some people who received such dubious money in their accounts had no connection whatsoever with the depositors and the amounts were withdrawn within 48 hours of being transferred.

In order to avoid detection by the Reserve Bank of India, the funds are transferred in small amounts not exceeding Rs one lakh. Banks in India are mandated to give a Suspicious Transaction Report (STR) if they find over Rs 10 lakh has been deposited in any account in one go and also if they notice regular flow of large amounts into it from the same source.

Therefore, the sources said, the money is deposited in various accounts in order to avoid being noticed and named in STR. The same set of people is used after a gap of no less than three to four months.

Over invoicing of goods by some Kashmiri businessmen doing trade in the Gulf has also come under NIA lens, sources said.
The Income Tax authorities have also been asked to share details about some businessmen to ascertain if the money transferred by them was used to fund militancy in the Valley, they said.

Inputs about money being pumped into the Valley was shared by the army with the NIA after which the agency registered a Preliminary Enquiry (PE) to probe the matter, they said.