Notably, Delhi ranks among the world’s top cities with foul air on a WHO list and has been trying to clean its air for a long time. 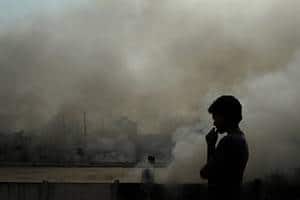 Considering that the Odd-Even phase 2 had little impact in curbing pollution in Delhi, the National Green Tribunal (NGT) has now asked authorities to find a solution for the growing pollution in the national capital. Notably, Delhi ranks among the world’s top cities with foul air on a WHO list and has been trying to clean its air for a long time.

Monitoring stations on Tuesday called the city’s air quality “very poor,” a category that causes breathing problems and respiratory illnesses after prolonged exposure, reports HT. Moreover, the condition worsens every autumn and winter as neighbouring states begin stubble burning during this time, which in turn causes a deterioration in the air quality.

According to the System of Air Quality and Weather Forecasting and Research (SAFAR), it recorded 120.8 micrograms of PM2.5 and 248 micrograms of PM10 per cubic metre around 5.30pm on Tuesday, which is much more than the safe limits of 60 and 100.

In such a scenario, NGT called a meeting between the Delhi chief secretary, Delhi Pollution Control Committee and similar stakeholders to arrive at solution for this. According to Central Pollution Control Board’s (CPCB) there was no improvement in the air quality during the Odd-Even scheme implemented in April this year. As a consequence of which, the tribunal asked the chief secretary to hold a meeting and listed the issue to be next discussed on November 16.

Earlier on October 6, the Delhi High Court directed the top officials of the neighbouring states to ensure a prohibition on crop stubble burning. Burning of crop residues is one of the major contributor to air pollution in Delhi from October to November. A bench comprising justices B D Ahmed and Ashutosh Kumar warned that it could hold chief secretaries of the respective states responsible if the “law is not followed in letter and spirit.” While making it clear to Punjab, Haryana, Rajasthan and Uttar Pradesh, the bench said that they had to stop stubble burning since it raises pollution levels in the national capital.

Next Story
Drone noticed in Mumbai airport; city on alert