The letter petition written by advocate Vineet Jindal to Chief Justice of India NV Ramana sought a direction to the Centre to form a committee to address the issues. 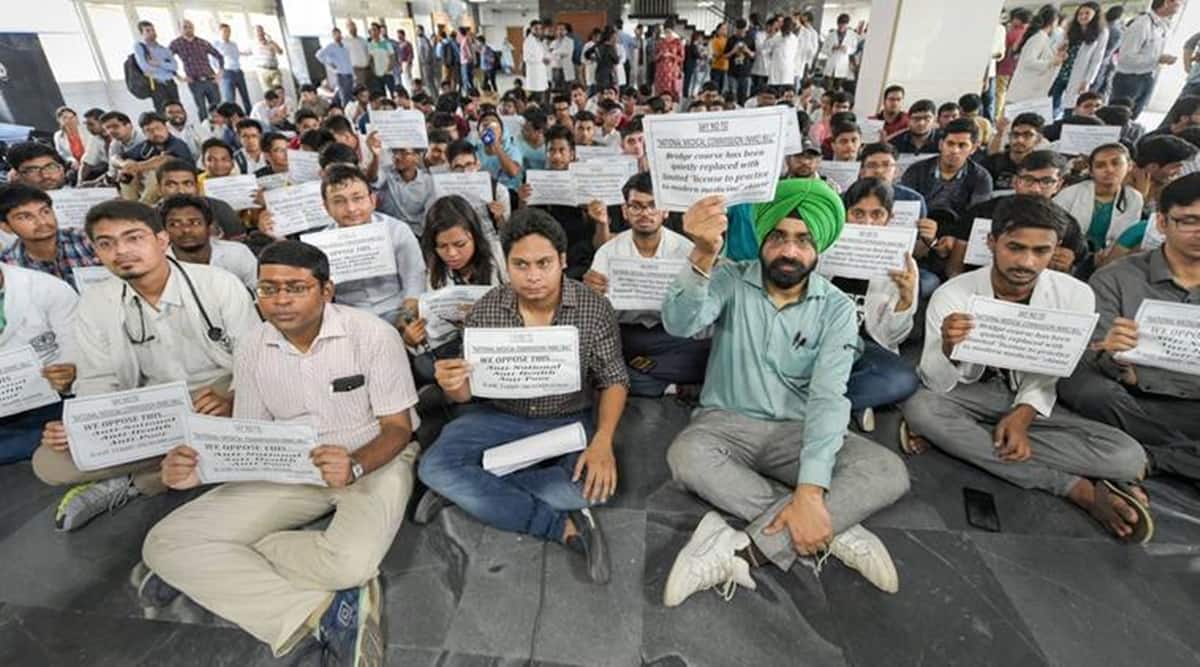 The Centre also told the top court that a committee would be formed to ascertain the criteria and the exercise would be completed in four weeks. (File/IE)

A letter petition was filed in the Supreme Court on Wednesday, seeking advancing of the scheduled hearing in a matter pertaining to the ascertaining of the EWS quota in NEET-PG admissions.

It also sought the issuance of a direction to the Delhi Police commissioner to initiate an enquiry and take stern action against the culprits in an incident of physical assault on protesting doctors by the police.

The letter petition written by advocate Vineet Jindal to Chief Justice of India NV Ramana sought a direction to the Centre to form a committee to address the issues related to the doctors concerned.

“The present letter petition is regarding the recent protest of the resident doctors for the last several days, headed by the Federation of Resident Doctors Association of India (FORDA), and the threat of mass resignation. This mass protest has resulted because the Union health ministry has not taken any concrete steps to expedite NEET-PG counselling,” it said.

The plea said the doctors have been striking work over the delay in the NEET-PG 2021 counselling, which is now pending the outcome of a batch of petitions over Economically Weaker Section (EWS) reservations before the apex court, which has fixed January 6 as the next date of hearing in the matter.

“The strike started with doctors boycotting work in out-patient clinics, which was later escalated to boycotting of all routine work such as care of admitted patients and routine surgeries when they did not receive any assurance from the Union health minister,” it said.

It added that initially, the delay in conducting the NEET-2021 PG examinations was due to the second wave of COVID-19 and it was further delayed due to the petitions pending for hearing before the court over the reservation issue.

“As per news reports, the health minister and other ministry officials denied to provide any written assurance as the matter was sub-judice and no assurance could be given till the outcome of the petitions pending with the court,” it said.

In his plea, Jindal pointed out that with the continuation of the boycott of hospital emergencies, all resident doctors hired on an ad-hoc basis have been warned by the hospitals of disciplinary action, including termination from service.

The petition said the FORDA has pointed out the “acute shortage” of resident doctors across the country as the counselling of the NEET-PG 2021 batch has already been delayed by eight months.

It said on December 27, the mass protest in Delhi was followed by a march taken out by doctors, which was stopped by the police near the ITO and the protesting doctors were brutally thrashed, dragged and detained by the police, which further aggravated the situation and has led to a complete shutdown of the healthcare facilities all over the country now.

The plea said it is a sad state of affairs that these doctors, who were once applauded and appreciated for their ceaseless efforts, are now overburdened and exhausted and their appeal seems to have fallen on deaf ears as the authorities do not seem to be concerned about the shortage in the healthcare workforce due to non-admission of a fresh batch of resident doctors.

“With doctors as our frontline warriors against this war with COVID, it is imperative to address the issues of resident doctors at the earliest to resolve their demands and call off the strike as soon as possible,” it added.

The Centre had told the top court on November 25 that the counselling for the NEET post-graduate medical courses will be further postponed by four weeks as it has decided to revisit the Rs 8 lakh annual income criteria for determining the EWS category for reservation in the admissions.

The Centre also told the top court that a committee would be formed to ascertain the criteria and the exercise would be completed in four weeks.

The court had recorded the submission of Solicitor General Tushar Mehta that the Centre has taken a considered decision to revisit the criteria for determining the EWS category in terms of the provisions of the explanation to Article 15 of the Constitution inserted by the Constitution (103rd Amendment) Act, 2019.

It also recorded the submission that “a period of four weeks would be required for this exercise and pending its conclusion, the date for counselling shall stand postponed because of the assurance which was tendered at an earlier stage of these proceedings”.

The apex court was hearing a batch of pleas filed by students challenging the July 29 notices of the Centre and the Medical Counselling Committee (MCC), providing 27 per cent reservation to the Other Backward Classes (OBCs) and 10 per cent reservation to the EWS category in the National Eligibility-cum-Entrance Test (NEET-PG) admissions for medical courses in the current academic year.

On October 25, the Centre had assured the court that the NEET-PG counselling process will not commence till the court takes a decision on the pleas challenging the 27 per cent reservation for OBCs and the 10-per cent quota for the EWS category in the PG All India Quota seats (MBBS/BDS and MD/MS/MDS) from the current (2021-22) academic year.

The Centre’s assurance came after some students mentioned before the court that according to the schedule announced by the Director General of Health Services, the counselling process for NEET-PG was to commence from October 25.

US Stock Market
S&P 500 to reach 5050 on continued robust earnings growth, says J.P. Morgan
Fund Managers maintain bullish stand on stocks, BofA survey shows; expect inflation to fall in 2022
Nasdaq 100: What strategists see for US stock market as treasury yields spike
NASDAQ Composite Index down by nearly 8% from 52-week highs – Check details
US Federal Reserve losing its fight against inflation, says Bill Ackman, wants 50 bps rate hike
View All
Latest News
‘Earlier there were monologues. Now there is a voice talking back’
Better than most: Meet Akshay Bhatia, brightest Indian-origin talent in the world right now
Rights and duties: ‘What is worrying PM Modi so much…’
Across the Aisle by P Chidambaram: No political price yet
Nepal, Egypt, Italy to Kenya – A look at Republic Days around the world
Young voices: More and more children are coming forward as opinion makers
The era of smart savers: How fintech industry is revolutionising finance in India
Most Read
The digital fence | Book excerpt – The Art of Bitfulness: Keeping Calm in the Digital World by Nandan Nilekani & Tanuj Bhojwani
BTS to Bollywood: The irrefutable power of social media and new-age celeb connections
The only constant | Book Review – How to Change: The Science of Getting from Where You Are to Where You Want to Be By Katy Milkman
FabIndia plans Rs 4,000 crore IPO; promoters to gift over 7 lakh shares to artisans, farmers
Photos
In Pictures: Indian Army patrols in heavy snow in Jammu and Kashmir’s Poonch
3 days agoJanuary 20, 2022
Share
Satellite images show huge damage in Tonga; Scientists say this underwater volcanic eruption may harm environment for years
5 days agoJanuary 18, 2022
Share
Realme 9i first look, impressions: Design, specs, features, and everything to know
5 days agoJanuary 18, 2022
Share
Read More
×
UP Election 2022: Amit Shah campaigns door to door in Kairana, meets families who had migrated in 2014
Punjab Election 2022: Capt Amarinder Singh to contest from Patiala seat
J&K Assembly polls after delimitation, statehood to be restored once situation normal, says Amit Shah
Delhi HC directs UIDAI to give info of people issued fake Aadhaar cards
Punjab Election 2022: Majithia accuses CM Channi of illegal sand mining; Sidhu hits back
PM Modi asks districts to set time-bound targets for govt programmes to increase ease of living