In a major change of strategy to counter the red extremists, the CRPF will replace the traditional INSAS weapons used by its personnel in Naxal bastions in 10 states with AK series rifles. 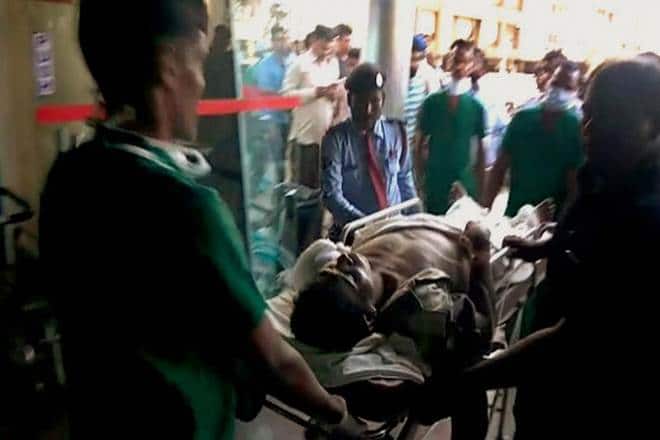 To reduce the influence of Maoists in one of their last bastions, the Central Reserve Police Force (CRPF) is moving a fresh contingent of 2,000 personnel in Chhattisgarh's south Bastar area, which it said was its "biggest challenge". (Representative Image Source: PTI)

In a major change of strategy to counter the red extremists, the CRPF will replace the traditional INSAS weapons used by its personnel in Naxal bastions in 10 states with AK series rifles. To reduce the influence of Maoists in one of their last bastions, the Central Reserve Police Force (CRPF) is moving a fresh contingent of 2,000 personnel in Chhattisgarh’s south Bastar area, which it said was its “biggest challenge”. “South Bastar remains one of their (Naxals) last bastions…in that area we have to plan how to reduce their (Maoists) influence. “We are looking to deploy one battalion in that area soon while one has just moved in. We are planning to induct more troops,” CRPF Director General R R Bhatnagar told reporters on on the eve of the 78th Raising Day of the force here. A battalion consists of 1,000 personnel.

He said that the Bastar area is a “big challenge” for the force. A senior CRPF officer later told PTI that the government has recently authorised the force to replace all its INSAS weapons with the AK series (47 and 56) of assault rifles in the ten Naxal violence hit states where it is deployed to carry out operations. “It is a generational shift in terms of weaponry. The INSAS has been the standard weapon of the force but the Naxal theatre is very hot and requires quick and heavy fire power. “Hence, all CRPF units in Naxal-hit states will now only have AK rifles. A few INSAS rifles would be kept for special purposes,” the officer said. An AK rifle is considered superior to the indigenously made INSAS (Indian Small Arms System) as its fire is accurate, spews quick bullets and is better to operate in jungle warfare conditions where moisture and heat affect the performance of a rifle.

Talking about the Left Wing Extremism theatre, where the CRPF is declared as the lead operations force, the DG said the area of influence of Maoists in states like Bihar, Jharkhand, Odisha and West Bengal has “shrunk” and there has been a sizable impact in the areas they control there. “In the last two-and-a-half years, the incidents of Naxal violence have reduced in all these states,” he said. With the induction of the two new battalions, the CRPF will now establish more camps in deep jungle areas along the southern tip of Chhattisgarh where the most Naxal violence affected districts of Sukma and Dantewada meet the borders of Andhra Pradesh, Telangana and Odisha. This tri-junction is considered the deadliest as Maoists cadres frequently move here taking advantage of the difficult terrain interspersed with hills, jungles and small rivers.

“Some permanent camps will now be opened in the ‘Madh’ area of the Abujhmaad jungles in Chhattisgarh where there is no presence of government machinery. But, this will take some time to happen,” an official said on the condition of anonymity, as he was not authorised to speak to the media. Bhatnagar, who took after the CRPF lost 37 men in Sukma district in a span of few days in March this year, said the force has done some “detailed analysis” of these incidents and have found certain factors that need to be dealt with. “We are now having close coordination with the state police…the security of our troops in terms of their preparedness, equipments, rations and others, is foremost. “Some new standard operating procedures have been made. All round efforts are being made to make the jawan safe,” the DG said.

We are looking at different technologies for surveillance in these areas, he said adding that these include procurement of smart gadgets and unmanned aerial vehicles (UAVs). An official data provided by the force said the CRPF has killed 51 Maoists, apprehended 1,111, got surrendered 834 and recovered 562 arms and 1,180 improvised explosive devices (IEDs) from the Naxal violence hit states this year. There are a total of 31 CRPF battalions (31,000 personnel) deployed in Chhattisgarh, with the maximum being in the Bastar region. The Central Reserve Police Force was raised on July 27, 1939 as Crown Representative’s Police (CRP) and at present is the largest paramilitary of the world having about three lakh personnel.