As per sources, the former cricketer is known to have met AAP supremo Arvind Kejriwal on August 12, however, the talks haven’t proceeded further. 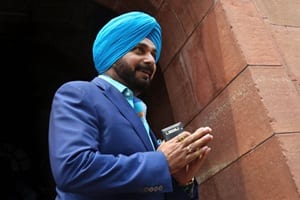 Ever since he quit the BJP and resigned from the Rajya Sabha, there has been speculations that Sidhu may join the Aam Aadmi Party and may even be fielded as its chief ministerial candidate.

Soon after cricketer turned politician Navjot Singh Sidhu resigned from the Rajya Sabha, there were speculations that he would be joining Aam Aadmi Party (AAP). While it is yet to come true, sources say that he has demanded to be named as the Chief Ministerial candidate of the party for the upcoming Punjab elections. Sources also have it that he wants a ticket for his wife and if his demands are not meant he might not join the party.

As per sources, the former cricketer is known to have met AAP supremo Arvind Kejriwal on August 12, however, the talks haven’t proceeded further. Sidhu, was keen on joining AAP after August 12 and before the Independence Day. Sources in AAP had earlier said that Sidhu wanted to join in the second week of August as Delhi Chief Minister Arvind Kejriwal would reach Delhi on August 11 after completing his 10-day vipassna.

While quitting BJP, he had alleged that he was asked to stay away from Punjab, which he wouldn’t do in any circumstances. He asserted that he will work for the welfare of Punjab and serve his motherland with all his efforts.  AAP national convener Kejriwal had welcomed Sidhu’s decision to quit Rajya Sabh hoping that the latter’s presence could be used to accelerate AAP’s campaign in Punjab. Reports have suggested that Sidhu will join AAP as a “star campaigner.”

Sidhu’s resignation along with his wife was a setback for BJP, which holds an alliance with the ruling Shiromani Akali Dal in Punjab. Amidst speculations as to which party he will join next, Congress too welcomed Sidhu in their party.