Navjot Singh Sidhu: I am a ‘born Congressman’, this is ‘Ghar Wapsi’ for me

Sidhu shed light on Punjab’s drug problem and blames the Shiromani Akali Dal for making the state their family business. 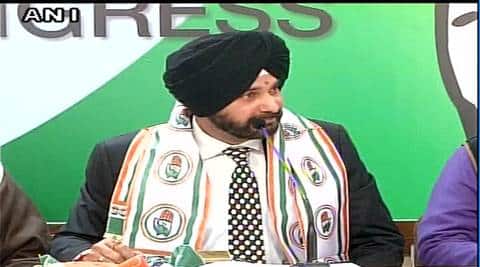 After joining the Congress Party on Sunday, with Vice President Rahul Gandhi sealing it officially by wrapping a party muffler around his shoulders, Navjot Singh Sidhu, who was a Bharatiya Janata Party (BJP)  member till now, addressed the press today and said that this was a ‘Ghar Wapsi’ of sorts  for him and that the was a ‘born Congressman’ as his dad was, who fought in India’s freedom struggle. He was speaking in the presence of senior Congress leader Ajay Maken  and other senior party members. Sidhu also targetted the Badal family and even invoked Ramayana to put the opposition down.

Sidhu shed light on Punjab’s drug problem and blames the Shiromani Akali Dal for making the state their family business. “Punjab’s drug problem is a reality, an ostrich mentality won’t work anymore. He said that he is ready to work under anyone, and he is not fighting any individual battle, but is fighting to save Punjab. Sidhu is bad-mouthed by opposition for not being able to make up his mind as to which party depicts his ideology and is said to have left many parties only because he was not given a desired role. He left the BJP in September 2014.

He says that he has a difference of opinion with Captain Amarinder Singh, president, Punjab Pradesh Congress Committee but if Nitish Kumar can work with Lalu Prasad in Bihar then why can’t they do. “If two nations can resolve issues sitting across table then why can’t two individuals, ” he said.

He said he wants to remind the people of Punjab about the green revolution when during the 1970s and 8-s it was the richest state in the country. He says, “there is over one crore five lakh youth in Punjab and its leaders need to show them the right direction.” He attacked the Badals, saying, “Bhaag baaba Badal bhaag, kursi khaali kar, Punjab ki janta aati hai.”

Sidhu added,”It is used to be government for the people and now it is government for the family. Shiromani started with good intentions but now it is family business,” he said. “Log kehte hain Sidhu party ko Maa kehta tha. Lekin Maa to Kaikeyi bhi thi. Sabko pata hai Manthara (who instigated Kaikeyi to send Lord Ram to vanvas for 14 years) kaun hai Punjab mein,” Sidhu said. He asked the public to decide who is Kaikeyi (Ram’s step mother) and who is Kaushalya (Ram’s mother) in Punjab.