National Herald Case HIGHLIGHTS: Sonia Gandhi grilled for over six hours on Day 2, summoned again by the ED on Wednesday 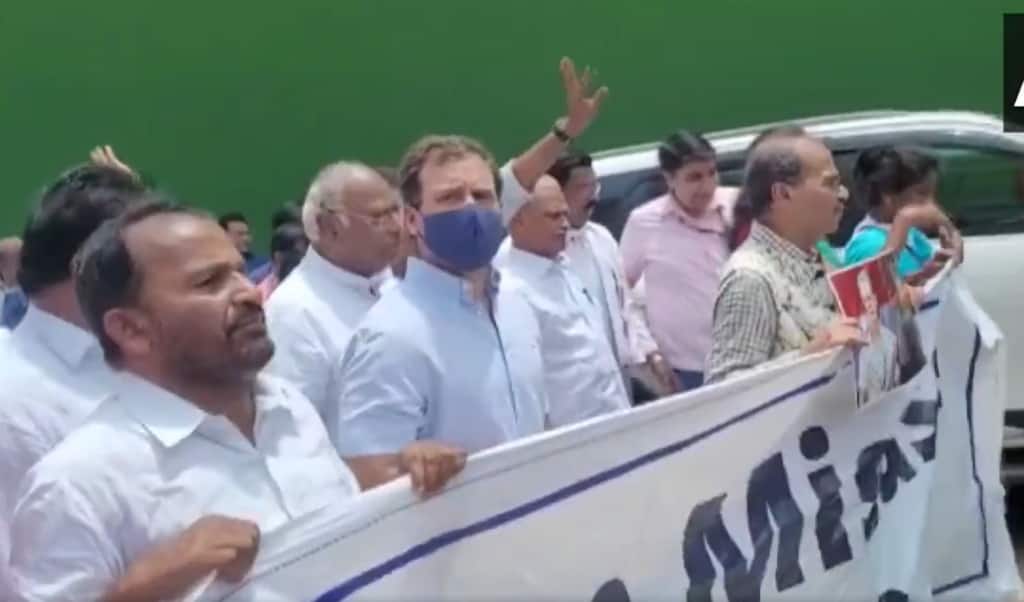 Sonia Gandhi National Herald Case Live News, Sonia Gandhi ED Deposition Today Live Updates: Sonia Gandhi on Tuesday left from the Enforcement Directorate (ED) office after six hours of questioning. The Congress interim President has been summoned again for the third round of questioning on Wednesday. Earlier, Congress MP Rahul Gandhi was detained by the Delhi police after he was left alone at the protest site at Vijay Chowk as all other the Congress MPs and leaders protesting with him were detained. After he was detained, Rahul Gandhi told journalists that they were protesting peacefully against price rise and the police. The situation in front of the party headquarters remained tense as Congress workers clashed with the police. Congress workers, protesting outside the AICC head office, were detained and were moved out of the spot in four separate buses. Congress interim President Sonia Gandhi is being quizzed by the Enforcement Directorate (ED) for the second time in connection with the National Herald money laundering case. Priyanka and Rahul Gandhi has also accompanied Gandhi to the ED office. While Rahul left the ED office for the protest site, Priyanka will be staying with her mother, seated in a separate room in case of any medical emergency. Meanwhile, the Congress leaders on Monday asked permission from the Delhi police to stage a ‘Satyagraha’ protest at the Raj Ghat. While denying permission, the Delhi police has imposed Section 144 in the Raj Ghat area.

The party had organised massive protests across the country on Thursday as Gandhi appeared before the central agency for the first round of questioning. In several places the protests took a violent turn, with the youth Congress protesters burning a car on the streets of Bengaluru, while several Congress workers stopped a train and blocked railway tracks in Delhi. Water canons were used to disperse unruly protests in many cities including Delhi and Chandigarh. Gandhi had reached the ED office at around noon on Thursday, accompanied by Rahul and Priyanka Gandhi. The 75-year-old Gandhi was also allowed to carry a doctor inside the ED office due to her ailing health. Gandhi was allowed to leave after three hours of questioning. While the Congress claimed that the ED was left with nothing to ask, the ED said that they allowed Gandhi to leave upon her request.

The ED is probing alleged financial irregularities in the acquisition of Associated Journals Limited by the Young Indian Private Limited, where Gandhi holds 38 per cent of the shares and is a director.

Sonia Gandhi leaves ED office after six hours of questioning at around 7 pm.

The detained Congress leaders huddled together to discuss several issues ranging from Agnipath to the falling rupee.

Congress MP and Rajya Sabha's leader of Opposition Mallikarjun Kharge was detained by the Delhi police for protesting against Sonia Gandhi's ED deposition.

Earlier visuals of Rahul Gandhi sitting on dharna at Delhi's Vijay Chowk right before his arrest.

13:20 (IST) 26 Jul 2022
National Herald Case Live: Centre trying to pressurise us by not allowing us to protest, says Maken

“We sought permission for a day's protest but the police denied it. We wanted to do a peaceful satyagraha at Gandhiji's samadhi at Rajghat. BJP leaders used to dance at his samadhi, but we wanted to hold a protest. Centre's doing politics to pressurise us,” Congress' Ajay Maken told news agency ANI.

Rahul Gandhi sat on a dharna alone before he was eventually detained by the Delhi police.

Sonia Gandhi has entered the ED office for second round of questioning. She was accompanied by Priyanka and Rahul Gandhi.

Senior Congress leader Ajay Maken hit out at the BJP-led central government for not allowing the party to organise a Satyagraha near Mahatma Gandhi's samadhi. “This is the death of democracy,” said Maken, while addressing a press conference ahead of Sonia Gandhi's ED deposition.

The National Herald case relates to a equity transaction in which Congress president Sonia Gandhi and her son Rahul Gandhi are accused of allegedly misappropriating assets of Associated Journals worth over Rs 2,000 crore by paying a paltry sum of just Rs 50 lakh. The Gandhis, however, have denied any wrongdoing, but courts have found merit in the allegations against them. Besides the Gandhis, Motilal Vora, Oscar Fernandes, Suman Dubey and Sam Pitroda are among the accused in the case. The case against the Gandhis and others is being pursued by BJP MP Subramanian Swamy.

“The whole nation is watching the drama Congress is doing in the name of Satyagraha. The Opposition is left without any agenda to protest on. Shouldn't there be an investigation after the Court has pulled the Gandhis up for the National Herald scam? Only because of their sense of entitlement and since the Congress doesn't want an investigation, shouldn't the ED probe the Gandhis?, asked BJP spokesperson Sambit Patra, while addressing a press conference.

The Delhi Traffic police has issued an alert from 10 am to 2 pm in several places including Akbar Road, Janpath Road and Tughlaq road.

There was heavy security deployed outside Congress office in Delhi ahead of Sonia Gandhi's ED deposition today.

“Our freedom movement was fought on the principles of non-violence and satyagraha, the teachings of Gandhiji. These ideals transcended boundaries and became the light of hope for many oppressed. The Modi government imposes 144 to suppress our Satyagraha at every spot,” Congress MP KC Venugopal wrote on Twitter, while adding, “Now they have imposed 144 even around Raj Ghat, the Samadhi of Gandhi ji, to stop peaceful Satyagraha by Congress MPs and CWC members against the misusing of agencies for political vendetta. This is beyond condemnation and they can’t silence our voice with brute force.”