India has created one record it would like to undo as soon as possible. The latest data from the World Health Organisation (WHO) shows 14 out of 20 most polluted cities of the world. 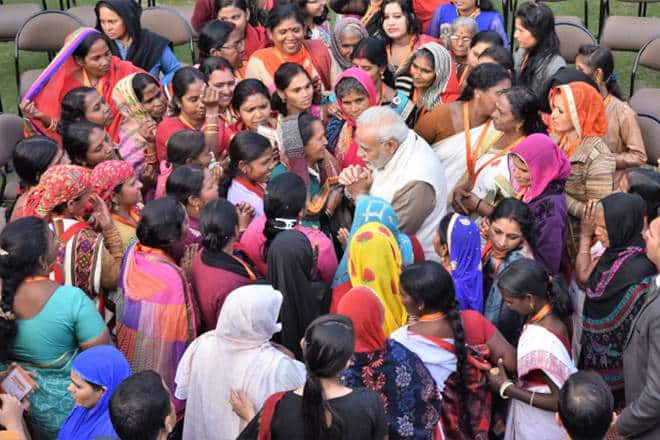 PM Narendra Modi with Ujjawala Yojana beneficiaries. Under the Ujjawala scheme, the government targets to reach as many as 80 million households by 2020. (Source: narendramodi.in)

India has created one record it would like to undo as soon as possible. The latest data from the World Health Organisation (WHO) shows 14 out of 20 most polluted cities of the world, in terms of PM 2.5 concentrations, are based in India. These include national capital Delhi and Prime Minister Narendra Modi’s parliamentary constituency Varanasi.

Other Indian cities in the top 20 are Kanpur (on top), Faridabad, Gaya, Patna, Agra, Muzaffarpur, Srinagar, Gurgaon, Jaipur, Patiala and Jodhpur. As far as PM10 levels are concerned, 13 out of 20 most polluted cities are in India.

The WHO report is based on 2016 data. The report, however, mentions that the country has taken measures to stop air pollution. It specifically mentions one of the pet schemes of Prime Minister Narendra Modi – the Pradhan Mantri Ujjwala Yojana, which aims to prove free LPG connections to women living below the poverty line.

“Countries are taking measures to tackle and reduce air pollution from particulate matter. For example, in just two years, India’s Pradhan Mantri Ujjwala Yojana Scheme has provided some 37 million women living below the poverty line with free LPG connections to support them to switch to clean household energy use,” WHO said in a release.

Under the Ujjawala scheme, the government targets to reach as many as 80 million households by 2020.

The scheme is more significant in the global context because the WHO has found that around 3 billion (300 crores) people of the world still do not have access to clean cooking fuels and technologies in their homes.

The report doesn’t find any other initiative in India worth noting even as it paints a scary situation as far as the air pollution in the country is concerned.

This doesn’t, however, mean there are no further efforts to tackle air pollution in India. There are 100s of schemes and initiatives but they are, probably not gathering the pace or the scale, like the Ujjawala scheme.

The WHO has called upon member countries to aggressively address the twin burden of household and ambient (outdoor) air pollution. According to the international agency, the region, comprising India, accounts for 34 per cent or 24 lakh of the total 70 lakh deaths per year globally caused by household.

“WHO estimates that around 7 million people die every year from exposure to fine particles in the polluted air that penetrate deep into the lungs and cardiovascular system, causing diseases including stroke, heart disease, lung cancer, chronic obstructive pulmonary diseases and respiratory infections, including pneumonia,” WHO said.