PM Narendra Modi’s address to the US Congress saw him referring to not only the need to deepen India-US ties, but also an indirect dig at Pakistan on terrorism. 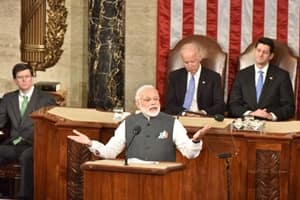 PM Modi in address to US Congress spoke of the lucrative Indian market for US investments, his own vision for the country's growth and prospect of India-US ties in the future. (Twitter Photo)

PM Narendra Modi’s address to the US Congress, which earned him eight standing ovations and sixty-six clapping interventions, saw him referring to not only the need to deepen India-US partnership and ties, but also an indirect dig at Pakistan on terrorism.

In a wide ranging speech, PM Modi spoke of the lucrative Indian market for US investments, his own vision for the country’s growth and prospect of India-US ties in the future. “In every sector of India’s forward march, I see the US as an indispensable partner. Many of you also believe that a stronger and prosperous India is in America’s strategic interest. Let us work together to convert shared ideals into practical cooperation,” Modi said. (Also read: PM Modi’s US Congress speech: As it happened)

“In the lines of Walt Whitman, the Orchestra have sufficiently tuned their instruments, the baton has given the signal. And to that, if I might add, there is a new symphony in play,” Modi said to sum up his address.

We take a look at 10 key highlights from PM Modi’s address to US Congress:

1) Vision for India: My dream is to economically empower them through many social and economic transformations. And, do so by 2022, the seventy-fifth anniversary of India’s independence.

My to-do list is long and ambitious. It includes: A vibrant rural economy with robust farm sector; a roof over each head and electricity to all households; to skill millions of our youth; build 100 smart cities; have a broad band for a billion, and connect our villages to the digital world; and create a twenty-first century rail, road and port infrastructure.

These are not just aspirations; they are goals to be reached in a finite time-frame. And, to be achieved with a light carbon foot print, with greater emphasis on renewables.

2) Combating terrorism: Not just in Afghanistan, but elsewhere in South Asia, and globally, terrorism remains the biggest threat. In the territory stretching from West of India’s border to Africa, it may go by different names, from Laskhar-e-Taiba, to Taliban to ISIS.

But, it’s philosophy is common: of hate, murder and violence. Although it’s shadow is spreading across the world, it is incubated in India’s neighbourhood.

The need of the hour is for us to deepen our security cooperation. And, base it on a policy: that isolates those who harbour, support and sponsor terrorists; that does not distinguish between “good” and “bad” terrorists; and that delinks religion from terrorism. Terrorism must be delegitimized.

The fight against terrorism has to be fought at many levels. And, the traditional tools of military, intelligence or diplomacy alone would not be able to win this fight.

3) Indirect dig at Pakistan: I commend the members of the US Congress for sending a clear message to those who preach and practice terrorism for political gains. Refusing to reward them is the first step towards holding them accountable for their actions. (Modi’s reference to rewards is being seen as a dig at the F-16 fighter jet deal between US and Pakistan being on hold)

4) Deepening ties: Ties of commerce and investment are flourishing. We trade more with the U.S. than with any other nation. And, the flow of goods, services and capital between us generates jobs in both our societies.

As in trade, so in defence. India exercises with the United States more than we do with any other partner. Defence purchases have moved from almost zero to ten billion dollars in less than a decade.

Our cooperation also secures our cities and citizens from terrorists, and protects our critical infrastructure from cyber threats. Civil Nuclear Cooperation, as I told President Obama yesterday, is a reality.

5) Investment prospects for US: As the US businesses search for new areas of economic growth, markets for their goods, a pool of skilled resources, and global locations to produce and manufacture, India could be their ideal partner.

India’s strong economy, and growth rate of 7.6% per annum, is creating new opportunities for our mutual prosperity.

Transformative American technologies in India and growing investment by Indian companies in the United States both have a positive impact on the lives of our citizens. Today, for their global research and development centres, India is the destination of choice for the U.S. companies.

It can also help ensure security of the sea lanes of commerce and freedom of navigation on seas.

7) Shared belief: The idea that all citizens are created equal is a central pillar of the American constitution. Our founding fathers too shared the same belief and sought individual liberty for every citizen of India.

Our founders created a modern nation with freedom, democracy, and equality as the essence of its soul. India lives as one; India grows as one; India celebrates as one.

For my government, the Constitution is its real holy book. And, in that holy book, freedom of faith, speech and franchise, and equality of all citizens, regardless of background, are enshrined as fundamental rights. All the 1.25 billion of our citizens have freedom from fear, a freedom they exercise every moment of their lives.

8) Support: Today, our relationship has overcome the hesitations of history. Comfort, candour and convergence define our conversations. And, in this exciting journey, the US Congress has acted as its compass. You helped us turn barriers into bridges of partnership.

In the fall of 2008, when the Congress passed the India-US Civil Nuclear Cooperation Agreement, it changed the very colours of leaves of our relationship. India will never forget the solidarity shown by the U.S. Congress when terrorists from across our border attacked Mumbai in November of 2008.

9) Jokes on bipartisanship & Rajya Sabha: I am informed that the working of the U.S. Congress is harmonious. I am also told that you are well-known for your bipartisanship.

Well, you are not alone. Time and again, I have also witnessed a similar spirit in the Indian Parliament, especially in our Upper House. So, as you can see, we have many shared practices.

10) People-to-people ties: Our people to people links are strong; and there is close cultural connect between our societies.

SIRI tells us that India’s ancient heritage of Yoga has over 30 million practitioners in the US. It is estimated that more Americans bend for yoga than to throw a curve ball. And, no Mr. Speaker, we have not yet claimed intellectual property right on Yoga.

Connecting our two nations is also a unique and dynamic bridge of three million Indian Americans. Today, they are among your best CEOs; academics; astronauts; scientists; economists; doctors; even spelling bee champions.