Prime Minister Narendra Modi-led Centre is all set to start work on an estimated $87 billion plan to connect some of the biggest rivers of the country. 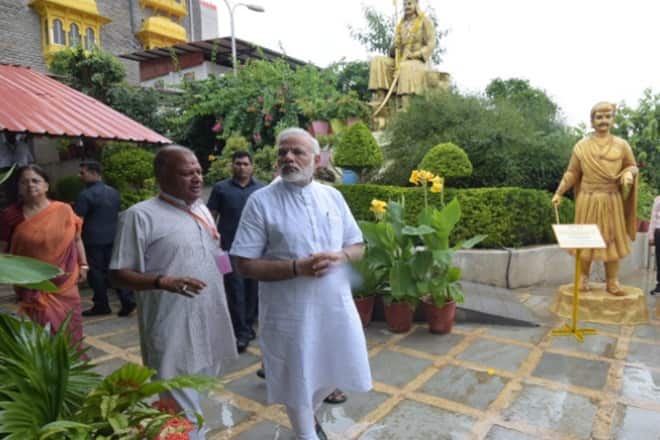 Prime Minister Narendra Modi-led Centre is all set to start work on an estimated $87 billion plan to connect some of the biggest rivers of the country within a month time, Reuters reported today. Government believes the ambitious plan would end the annual havoc created by droughts and floods in many parts of the country. This year itself, over 1000 people have lost their lives in floods in eastern as well as western parts of India. According to Reuters, Modi’s big plan involves linking of around 60 rivers across India, including the mighty Ganges. This is expected to help end farmers’ dependence on fickle monsoon rains, bringing millions of hectares of cultivable land under irrigation.

The river-linking plan was first proposed Atal Bihari vajpayee-led NDA government at the Centre in 2002. Works couldn’t be carried out so far as states failed to end differences over water sharing contracts and clearances were stalled by the lazy bureaucracy. The news agency reported that PM Modi has personally pushed through clearances for the first phase of the project, which would also help generate thousands of megawatts of electricity.

Here we take a look at the first phase of the ambitious project as well as similar such projects already being carried out by states:

This project will involve construction of a dam on the Ken river, also known as the Karnavati, in north-central India and a 22-km (14-mile) canal connecting it to the shallow Betwa. Both rivers flow through vast swathes of Uttar Pradesh and Madhya Pradesh states, ruled by Modi’s BJP. The PM hopes this project would become a template for other proposed river interlinking projects.

The 265-mile Ken flows through a tiger reserve. The government plans to clear out 6.5 percent of the forest reserve to build the dam, relocating nearly 2,000 families from 10 remote villages. Modi’s cabinet is likely to give its final go-ahead for the project within a couple of weeks.

2. Projects to interlink Par-Tapi with Narmada and Daman Ganga with Pinjal:

At present, the paper works to interlink Par-Tapi with Narmada and Daman Ganga with Pinjal are being completed, according to Reuters. These projects involve PM Modi’s home state Gujarat and neighbouring Maharashtra, both ruled by BJP.

Andhra Pradesh successfully finished the project to interlink Krishna and Godavari rivers this year. The project interlinking both rivers in AP’s West Godavari district was completed in a record time of around one year. The project was first visualised way back in the 1950s and revived during the first NDA regime led by Vajpayee.

In June this year, PTI reported AP water resources minister Devineni Umamaheswara as saying the river interlinking project helped farmers in saving their crops from cyclone. “The diversion of water will benefit West Godavari, Krishna, Guntur and Prakasam districts,” he said, adding, “As a result of diverting 143 TMC water from Godavari to Krishna in the years 2015 and 2016 crops valued at almost Rs 8,500 crore were saved in the region.”

The Tamil Nadu government is already working on the project to interlink Thamirabarani, Karumeniyar and Nambiyar rivers by excavating a new flood carrier canal from the existing Kannadian channel, which is one of channels of river Thamirabarani. The project has been in the pipeline since 2008. Then the estimated cost of the project was Rs 369 crore. The revised estimated cost for completion of the project is now over Rs 850 crores in 2017. The river interlinking project in the state gained momentum this year.

According to The Hindu, the state government is planning to carryout at least six river interlinking projects at a total cost of over Rs 9000 crore. These include Pennaiyar (Krishnagiri reservoir)-Palar link to transfer water from Krishnagiri dam to Kallar, a tributary of Palar; Pennaiyar (Sathanur dam)-Palar link to feed the Nandan Channed; Cauvery-Sarabanga link to boost irrigation potential in sub-basins fo Sarabanga, Thirumaniamutha and Muisiri.