G7 Summit: This would be the second meeting between PM Modi and President Trump this year. Earlier, the two leaders had met on the sidelines of the G20 summit in Osaka, Japan. 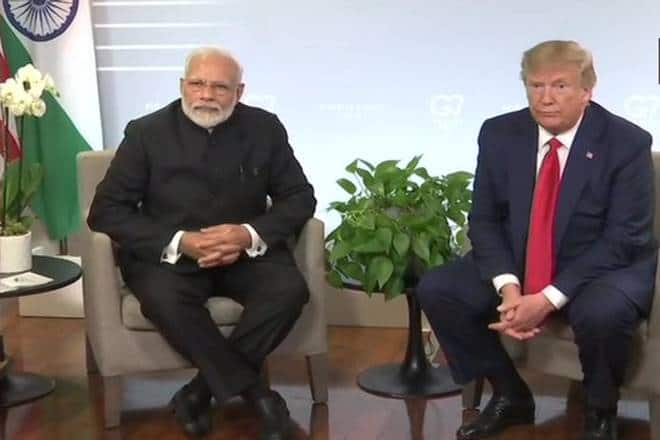 G7 Summit: Prime Minister Narendra Modi and US President Donald Trump met today in Biarritz in France on the sidelines of the G7 Summit. Addressing the media, the US President Donald Trump during bilateral meet said: “We spoke last night about Kashmir, Prime Minister really feels he has it under control. They speak with Pakistan and I’m sure that they will be able to do something that will be very good.”

This was the second meeting between PM Modi and President Trump this year. Earlier, the two leaders had met on the sidelines of the G20 summit in Osaka, Japan.

The meeting assumes significance as it comes in the backdrop of Trump’s latest remarks on Kashmir. Though the US has reaffirmed that there was no change in its Kashmir policy and that it was a bilateral issue between India and Pakistan, Trump had said that he was ready to mediate between India and Pakistan on the Kashmir issue. The issue is likely to figure during talks when Modi and Trump meet in Biarritz.

Earlier this week in Washington, Trump had said that he would discuss the situation in Kashmir with PM Modi and help ease the Indo-Pak tensions when they meet at the G7 Summit in France.

US President Donald Trump said that he was confident that India and Pakistan will be able to resolve the Kashmir issue among themselves. He said, “I am sure they can do it themselves. They have been doing it for a long time. I am sure that India will be able to do something that will be very good.” His statements assume significance as he had stirred controversy last month saying that he was ready to mediate between India and Pakistan on the Kashmir issue.

Modi makes it clear: No third-party intervention in Kashmir

Minister Modi to Trump: ‘All issues between India and Pakistan are bilateral in nature, that is why we don’t want to bother any other country regarding them. India and Pakistan were together before 1947 and I’m confident that we can discuss our problems and solve them together.’

At the @G7 Summit in Biarritz, I addressed the session on ‘Biodiversity, Oceans, Climate.’ Highlighted India’s large scale efforts towards eliminating single use plastic, conserving water, harnessing solar energy and, protecting flora and fauna for a sustainable future. pic.twitter.com/djS5ksgVEZ

Though India is not a member of the G-7 grouping, PM Modi has been personally invited by French President Emmanuel Macron. The Ministry of External Affairs (MEA) had said that the invitation was a reflection of the personal chemistry between the two leaders and also a recognition of India as a major economic power. The United States, United Kingdom, Canada, France, Germany, Italy and Japan are the members of the G7.

PM Modi arrived in France on Sunday evening to attend the G7 Summit where he will speak on burning global issues of environment, climate and digital transformation and also meet the world leaders. PM Modi arrived in Biarritz from Manama, Bahrain’s capital where he offered prayers at the Shreenathji Temple, the oldest temple in the Gulf region.