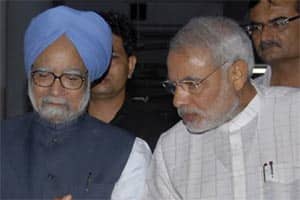 “(Narendra) Modi is a man full of energy. He wants to do things and nobody can treat him as anything less than a leader and he now has the mandate,” the renowned economist told NDTV.

BJP-led NDA swept the Lok Sabha elections held in May last year with a strong mandate.

Singh, the architect of economic reforms in 1991, was protected by the then Prime Minister P V Narasimha Rao, but since it was a minority government there was a limit to the “pace” at which Singh could go as the then Finance Minister, Bhagwati said.

“When you compare the speeches of the two (Singh and Modi), Manmohan Singh temperamentally is like President Barack Obama…he does have ideas, but because he can lead from behind, he can face blockages,” he added.

Asked why he thinks Modi will open up multi-brand retail to FDI, Bhagwati said the traditional base of BJP was small retailers, but now Modi has a “much wider constituency, so he does not have to depend on that core group”.

On newly formed NITI Aayog that replaced Planning Commission, the Columbia University professor said what he liked about it is that “focus will be on policies and that is where the real action should be”.