Mumbai Weather Forecast, Heavy Rains: Three people have lost their lives in Mumbai on Wednesday in different rain-related incidents. The IMD has issued an orange alert for Mumbai and adjoining areas today.

Rains in Mumbai Today, Mumbai Weather Forecast Highlights: Three people including two BMC officials have lost their lives in different rain-related incidents in Mumbai. The India Meteorological Department (IMD) issued an ‘orange alert’ for the city today as water was receding in many parts. As a precautionary measure, the BMC has ordered closure of schools and colleges. The weather department has predicted intense rain in Mumbai and the surrounding areas in the next 24 hours.Yesterday, waterlogging occurred in the areas near King Circle railway station, Sion and Gandhi market. The IMD said that out of the 150 weather stations in the Mumbai Metropolitan Region (MMR), around 100 recorded over 200 mm rainfall in last 24 hours. The neighbouring Raigad district recorded almost 300 mm rainfall in last 24 hours.

Meanwhile, the opposition parties have launched a scathing attack on the state government, saying its disaster management has completely failed. Congress leader Vijay Wadettiwar, who is Leader of the Opposition in the state Assembly, said people should take care of themselves in such a crisis situation and not rely on the government and the BMC for help.

Weather Forecast by IMD at 2 pm: Intermittent rain or showers with the possibility of heavy falls at few places in the city and suburbs. 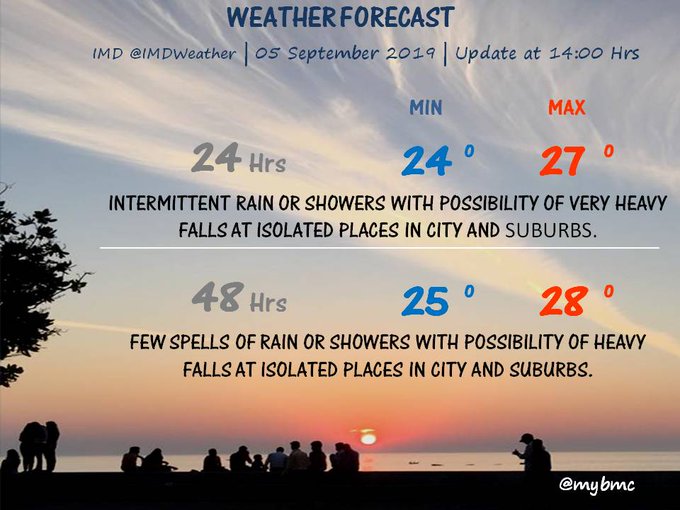 In the last four days, Mumbai has received 399.4 mm of rain, which is more that the average rainfall of September. In the last 11 years, the average September rainfall has been 341 mm. On Wednesday only, the city received 350 mm rainfall.

The IMD has issued an ‘Orange’ alert in Mumbai in view of the bad weather. The organse alert means the authorities (Mumbai Police, Brihanmumbai Municipal Corporation (BMC), Mumbai Fire Brigade, National Disaster Response Force (NDRF), Railways, etc) to be prepared to deal with any situation.

The Maharashtra State Electricity Distribution Company Limited had to shut down electricity of over 1.7 lakh customers across Thane, Navi Mumbai and Vasai Virar. after their feeders in Vasai were inundated. The municipal hospital in Vashi developed several leakages and buckets had to be placed around the wards and lobbies to collect rainwater.

Of the 150 weather stations in the Mumbai Metropolitan Region (MMR), around 100 recorded over 200 mm rainfall in the last 24 hours, the India Meteorological Department (IMD) said.

Bollywood celebrities, including Salman Khan, Katrina Kaif, Dharmendra, Sunny Deol, had to call off their events afterheavy rains pounded Mumbai and its suburbs on Wednesday. An official press conference of the 20th Homecoming Edition of NEXAIIFA Awards2019 wasscheduled to take place on Wednesday evening with guests like Salman, Katrina and Madhuri Dixit, among others, in attendance. But the event was also called off due to rains.

A six-year-old kid who fell in an open gutter in Mumbai's Nala Sopara area has been found dead. The body of the kid was found yesterday evening from a nallah in a garden area of Krishna Nagar society. The kid was playing with his three-year-old sister near his residence in Santosh Bhuvan when he fell in an open drain on a waterlogged road. CLICK HERE TO READ MORE

According to India Meteorological Department (IMD) data, the Kurla fire station recorded 141.97 mm rainfall in 12 hours on Wednesday, while the Santacruz observatory recorded 214.4 mm rainfall during the same period.

Newly-appointed Maharashtra Governor Bhagat Singh Koshyari, who arrived at the Mumbai airport on Wednesday, was also affected by the showers. His convoy was made to wait on a road near the airport as a portion of it was under water.

Nine hours of extremely heavy rainfall flooded the Mithi river, disrupting the road and suburban rail services in Mumbai on Wednesday. The situation worsened in the afternoon as water from the flooded Mithi river was pushed back by the high tide.

The Maharashtra government has declared a holiday on Thursday in all schools and junior colleges in Mumbai, Thane and the Kokan region as a precautionary measure in view of heavy rainfall forecast. Earlier on Wednesday, the BMC had asked the schools in the city and suburbs to remain closed in view of bad weather.

A 24-year-old man fell in the Mithi river and drowned during heavy rain on Wednesday at Bandra Kurla Complex (BKC) in western suburbs. The incident took place at Bharatnagar, which is adjacent to the Mithi river in the BKC area. The deceased has been identifed as Mohammed Shahrukh Rafique Shaikh.

IMD predicts heavy rain in Mumbai in next 24 hours

The IMD has predicted intense showers in Mumbai and its neighbouring areas in next 24 hours and issued a 'red alert', asking the authorities to be prepared to handle any situation.

A PTI report said that flight operations at Chhatrapati Shivaji Maharaj International Airport (CSMIA) were affected for the second day with cancellation of 30 flights and another 118 getting delayed on Thursday. As per a live flight-tracking website, 14 incoming and 16 outbound flights were cancelled on Thursday. In addition, 118 flights were delayed, including 86 departure. However, in a brief statement, Mumbai International Airport Airport Ltd (MIAL) said that "operations are normal".

The Congress has launched a scathing attack on the Maharashtra government for failure of its disaster management. Vijay Wadettiwar, who is Leader of the Opposition, said people should take care of themselves in such a crisis situation and not rely on the government and the BMC for help. "Mumbaikars should take the responsibility of saving them upon themselves. They should not rely on the government and the corporation," Wadettiwar said.

Three people lost their lives in Mumbai on Wednesday in different rain-related incidents. The deceased persons include two BMC officials. They have been identified as Vijayendra Sardar Bagdi (36) and Jagdish Parmar (54). CLICK HERE TO READ MORE

Over 100 villages in Gadchiroli and Gondia in Vidarbha region and several others in Ratnagiri and Sindhudurg of Konkan region are cut off from other parts of the respective districts due to water-logging on roads. Landslides are also reported in some Western Ghats areas of Raigad and Sindhudurg districts.

The Mumbai civic body has asked the schools in the city and suburbs to remain closed in view of the weather department's warning of heavy rainfall in the city. The Brihanmumbai Municipal Corporation (BMC) also asked the school principals to ensure that the students are sent back home safely.

Western Railway suburban services are operational between Churchgate and Vasai Road on both fast lines. However, train services on slow lines are not running due to waterlogging near Matunga railway station. Low pressure over the Bay of Bengal has resulted in torrential showers in Mumbai city, suburbs, Thane and Palghar.

The neighbouring Raigad district received almost 300 mm rainfall in last 24 hours, the IMD said. It said that going by the progress of clouds, no red alert has been issued in Raigad. Parts of Palghar and Thane districts also received more than 204 mm downpour in last 24 hours.

The India Meteorological Department (IMD) said that out of the 150 weather stations in the Mumbai Metropolitan Region (MMR), around 100 recorded over 200 mm rainfall in last 24 hours. The situation is likely to remain like this for next 24 hours. Low pressure over the Bay of Bengal has resulted in torrential showers in Mumbai city, suburbs, Thane and Palghar.

With heavy rains pounding Mumbai and its suburbs, the IMD on Wednesday issued a 'red alert' for the city and adjoining areas and asked the authorities to be prepared to handle any situation. "We have issued a red alert for various places, including Mumbai city and suburbs, Thane and Palghar districts, for next 24 hours," an IMD official told PTI.

"Considering IMD's heavy rainfall warning, we request Mumbaikars to stay indoors in safe premises till the water in low lying areas recedes. Please call us on 1916 or tweet to us for updates," the Brihanmumbai Municipal Corporation has tweeted.

The IMD said that the southwest monsoon picked up pace in its final leg in Mumbai. The agency forecast enhancement in rainfall till September 6 in Mumbai, neighbouring cities of Thane, Palghar and interiors of Maharashtra.

A report in The Indian Express said that Mumbai received very heavy rainfall at 118.3 mm in the last 24 hours ending at 8:30 am. The total seasonal rainfall is 2848.2 mm.

Rains in Mumbai: Mumbai Police ask people to dial 100 in case of emergency

Earlier on Tuesday, Mumbai Police had warned the public of heavy rainfall and urged them to take precautions. In a tweet, it asked people to take adequate precautions and ensure safety. "Dial 100 in case of an emergency. Take care Mumbai," a tweet by the official handle of the Mumbai Police read.

According to a report in The Indian Express, severe waterlogging reported in Rabale near the Rabale lake. Knee-deep water enters offices and several auto-rickshaws and bikes have had to be left on the road.

It was an overcast, sultry morning in Delhi with the minimum temperature settling at 26.8 degrees Celsius, three notches above the average in the season. The MeT department has forecast light to moderate rains for the day. The maximum temperature is expected to hover around 33 degrees Celsius. Relative humidity was 84% at 8.30 AM.

In the wake of IMD’s warning of heavy rainfall for Wednesday, all Mumbai schools shall remain closed today, the BMC said in a statement. The civic body has asked the people to avoid going out and remain indoor.

The IMD has issued an ‘orange alert’ with a forecast of enhancement in rainfall till September 6 in Mumbai, Thane, Palghar and interiors of Maharashtra.

The IMD has forecast heavy to very heavy spells in and around Mumbai for the next two days. It said that the maximum and minimum temperatures are most likely to remain around 29 degree Celcius and 24 degree Celcius, respectively.

Several areas have been waterlogged in Mumbai following heavy rainfall since last night. The area where waterlogging occurred are near King Circle railway station, Sion and Gandhi market.

Mumbai rains live updates: Several areas inundated as city receives heavy rainfallMumbai is witnessing another spell of rains. Overnight heavy spells of rain inundated several areas in the city. The areas that have been waterlogged include King Circle, Sion and Gandhi market. The rains have virtually halted all traffic movement, leading to huge traffic snarls across the city.