Jammu and Kashmir Chief Minister Mufti Mohammad Sayeed has died aged 79 in Delhi – Sayeed is credited with having crafted an ‘impossible’ alliance with the Bharatiya Janata Party (BJP), helping it share power for the first time in the Muslim majority state. 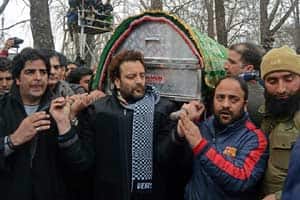 Jammu and Kashmir Chief Minister Mufti Mohammad Sayeed has died aged 79 in Delhi – Sayeed is credited with having  crafted an ‘impossible’ alliance with the Bharatiya Janata Party (BJP), helping it share power for the first time in the Muslim majority state.

Mufti Mohammad Sayeed breathed his last at AIIMS this morning after remaining on ventilator for the past few days.

A Congressman till 1987, Mufti Mohammad Sayeed left the party and joined the ranks of V P Singh to become the only Muslim Home Minister when he was inducted into the cabinet of the National Front government in 1989.

Mufti Mohammad Sayeed, who was chief minister from 2002 to 2005 in coalition with Congress, played a leading part in PDP and BJP coming together to form the first ever coalition involving the saffron party in the state.

Sayeed’s daughter 56-year-old Mehbooba Mufti is expected to take over as the first woman Chief Minister of the state with PDP leaders throwing their weight behind her. But this will require the approval of BJP.

The mortal remains of Sayeed were flown in a special Indian Air Force plane to Srinagar and are likely to be buried at his ancestral village in Bijbehara in South Kashmir.

Prime Minister Narendra Modi and Home Minister Rajnath Singh paid tributes to Sayeed at the Palam technical area before the body was flown to Srinagar.

The Central Government announced that the national flag will be flown half-mast today across the country as a mark of respect to the departed leader, who has also been accorded a state funeral.

Sayeed was flown from Srinagar in a special plane on December 24 and admitted to the AIIMS where he was diagnosed with sepsis (life threatening complication of an infection) and pneumonia. During hospitalisation his platelets had dropped dangerously, doctors said.

He is the second J and K Chief Minister to die in office, the first one being Sheikh Mohammad Abdullah who died on September 8, 1982.

Sayeed is survived by his wife, three daughters and a son.

Jammu and Kashmir government has declared a seven-day mourning and holiday today. Flags will be flown at half mast.

Sayeed took over as chief minister of PDP-BJP coalition on March 1 last year. In the 87-member J and K Assembly PDP won 28 seats and BJP 25 while opposition National Conference got 15 and Congress 12.

Condoling the death of Sayeed, Prime Minister Narendra Modi said it left a huge void in the nation and that the leader who provided a healing touch would be missed.

“What stood out about Mufti Sahab was his statesmanship. In his long political journey he won many admirers across the political spectrum,” Modi said.