Nothing has come out at Vienna NSG meeting for India: Congress

Congress today said India has suffered a “setback” as it has failed to gain entry into the Nuclear Suppliers Group in the backdrop of China playing a spoiler. 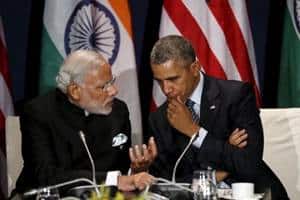 In her new book "This Brave New World: India, China and the United States", published by Simon and Schuster, Manuel stresses on bringing China and India along as partners rather than alienating one or both. (Reuters)

Congress today said India has suffered a “setback” as it has failed to gain entry into the Nuclear Suppliers Group in the backdrop of China playing a spoiler.

“Unfortunately, when the NSG met last night, on the question of admission of new members essentially to consider India’s application, nothing really came out of that meeting and so in real terms, it has really been a setback for India rather than something to be proud of”, party spokesman Manish Tewari told reporters.

Tearing apart claims of the government and the BJP that PM’s just concluded tour to several contries including US as a big strategic and diplomatic success, he dismissed as a “big zero” the sum total of the foreign visits and foreign policy initiatives.

“Never ever in the past almost three decades, China has taken such an absolutely hostile position to India whether on the question of the Nuclear Suppliers Group or even getting the Jaish-e-Mohd and Maulana Masood Azhar labeled as terrorist entity”, Tewari said.

He said China “has never been so belligerent in the past 29 years”.

“China is extremely crucial and has a sensitive relationship with India but has never been so belligerent in the past 29 years ever since late Prime Minister Rajiv Gandhi broke the ice with China in 1987”, he said.

Reports from Vienna had it that with the US pushing its case, India’s bid for membership of the elite 48-member grouping has received positive indications from most of the member countries but China was still playing the spoiler by persisting with its opposition.