Prime Minister Narendra Modi addressed a joint session of the US Congress, in a speech that ranged from India-US defence, strategic and economic ties. 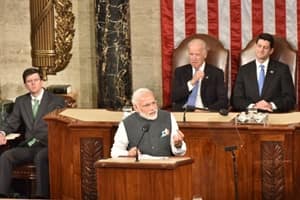 PM Modi highlighted the importance of India-US partnership, and strongly emphasised on the need to combat terror. (Twitter Photo)

PM Narendra Modi’s address to the US Congress saw a strong pitch to deepen India’s ties with America. PM Modi’s speech ranged from importance of India-US defence partnership to strategic and economic ties.

PM Modi also strongly emphasised on the need to combat terror. In an indirect dig at Pakistan, Modi lauded US Congressmen for “sending a clear message to those who preach and practice terrorism for political gains.” “Refusing to reward them is the first step towards holding them accountable for their actions,” Modi said.

Modi’s address earned him eight standing ovations and sixty six clapping interventions. The PM also outlined his vision for India’s growth, stressing that prosperity of the rural economy is key to his goals. Modi spoke of his plans for smart cities, railways and Digital India.

A speech which spoke to America. PM @narendramodi receives a standing ovation as speech ends pic.twitter.com/dWvnWyzqwl

We take a look at the timeline of PM Modi’s address to the US Congress:

9:35 PM: To quote Walt Whitman, the Orchestra have sufficiently tuned their instruments, the baton has given the signal. And to that if I may add, there is a new symphony in play.

9:34 PM: In my final thoughts and words, the constraints of the past are behind us and foundations of future are firmly in place.

9:28 PM: For us in India, to live in harmony with mother earth is a part of our ancient belief

9:27 PM: Humanity must speak in one voice. Terrorism must be delegitimized

9:25 PM: I commend the members of US Congress for sending a clear message to those who preach and practice terrorism for political gains. Refusing to reward them is the first step towards holding them accountable for their actions.

9:23 PM: Terrorism may go by different names such as ISIS, LeT – it’s ideology of hate is common. Although it’s shadow is spreading across the world, terrorism is incubated in India’s neighbourhood.

9:22 PM: I was in Afghanistan a few days ago. Afghans naturally recognise that the sacrifices of America have helped create a better life.  India too has made sacrifices in our commitment to build a peaceful Afghanistan.

9:21 PM: A strong India-US partnership can anchor peace, prosperity, and stability from Asia to Africa & from Indian Ocean to the Pacific

9:20 PM: India’s strong economy and growth rate of 7.6% per annum, is creating new opportunities for our mutual prosperity.

9:19 PM: India can use US’ transformative and innovative technologies. The innovative genius of US an intellect of India are working together in California.

9:18 PM: I see US as an indispensable partner. Many believe that a stronger India is in America’s strategic interest. Let us work together to convert shared ideas into practical cooperation.

9:16 PM: My to-do list includes: A vibrant rural economy with robust farm sector; a roof over each head and electricity to all households; to skill millions of our youth; build 100 smart cities; have a broad band for a billion, and connect our villages to the digital world; and create a twenty-first century rail, road and port infrastructure.

9:15 PM: My dream is to economically empower Indians by 2022, the 75th anniversary of India’s independence. My to-do list is long, but you have to understand that it includes a vibrant rural economy.

9:14 PM: Long before assuming office, I travelled coast to coast in more than 25 states in America. I realised that the real strength of US lies in their dreams and ambitions.

9:13 PM: Indian diaspora are among your best CEOs; academics; scientists; economists; doctors; even spelling bee champions. They symbolise the best of both countries.

9:11 PM: Our people-to-people connect is great. Siri, you are familiar with it, Siri tells us that the ancient practice of yoga is followed by over 30 million US people. We don’t claim any intellectual property right on yoga, Modi jokes.

9:10 PM: As in trade, so in defence. India exercises more with US than with any other partner. Our defence purchases have gone from almost zero to $10 billion in less than a decade.

9:09 PM: We trade more with US than with any other nation. The flow of goods and services generates jobs in both the economies.

9:08 PM: Our science and technology partnership help us solve problems in the fields of education and health.

9:07 PM: You are well-known for your bipartisanship. I have also witnessed a similar spirit in Indian Parliament, especially in Upper House – jokes PM Modi.

9:05 PM: India will never forget the solidarity shown by the US Congress against terrorists from across the border, who attacked Mumbai in 2008.

9:04 PM: You have helped us turn various barriers into bridges of partnership. In 2008, when Congress passed the Civil Nuclear Agreement, it was a big turning point. You have also stood by us in times of sorrow.

9:02 PM: Today our relationship has overcome the hesitations of history.

9:00 PM: The genius of Dr. B. R. Ambedkar was nurtured in the years he spent at the Columbia University a century ago

8:56 PM: India lives as one, India grows as one, India celebrates as one. For my government, the Constitution is the real holy book. Freedom of faith, speech and franchise and equality of all citizens, regardless of background are enshrined as fundamental rights.

8:55 PM: Our founders created a modern nation with freedom, equality as the essence. In doing so they ensured that we continue to celebrate our age old diversity.

8:54 PM: Our nations may have been shaped by different history and faith. Yet our belief in democracy is common. The idea that all citizens are created equal is a belief that India and US share.

8:53 PM: In granting me this opportunity to address US Congress, you have honoured the world’s largest democracy and its 1.25 billion people.

8:51 PM: Two days ago I began my visit by visiting the Arlington cemetry. Many brave soldiers of this land rest there. India applauds the great sacrifices of the men & women from ‘The Land of the Free and the Home of the Brave’ in service of mankind

8:50 PM: It manifests the spirits of a nation which is in Abraham Lincoln’s words conceived in liberty, and dedicated to the proposition that all men are equal

8:48 PM: I am deeply honoured by the invitation to address this joint meeting of the US Congress. Thank you Mr Speaker, for opening the doors of the Capitol Hill. This temple of democracy has encouraged and empowered other democracies the world over.

8:38 PM: Members of the Congressional Escort Committee to escort PM Modi into the House to deliver his address

8:27 PM: Senator Reid tells PM Modi, “One of my most cherished memories is a statue of Gandhi gifted by a student named Modi decades ago.”

8:25 PM: Paul Ryan tells PM Modi, “Following shooting incident in gurudwara in my constituency, the Sikh community’s compassion & forgiveness has been a lesson.”

The rituals of an old democratic tradition. PM @narendramodi is greeted by Members of Congressional Escort Committee pic.twitter.com/PDViOIw9ca

Given that this is an election year, Modi might be the only foreign leader to have the distinction to address a joint meeting of the Congress this year and into early next year.

Paul Ryan, the 54th and current Speaker of the US House of Representatives said, “This morning at 11am ET – a #JointMeeting of Congress with @pmonindia. #ModiInUS.” Modi is addressing the joint meeting of the US Congress at the invitation of Paul Ryan.

Ahead of Modi’s address, Richard Verma, US Ambassador to India tweeted, “A beautiful morning and stunning US Capitol complex…ready for a historic joint address by @narendramodi.”

Meanwhile, on Tuesday, PM Modi’s fourth US visit and meeting with President Barack Obama was marked by several key benefits for India in sectors ranging from defence, clean energy to science and support for India’s entry bid into Nuclear Suppliers’ Group (NSG).

PM Modi and US President Obama pledged to pursue new opportunities to bolster economic growth and sustainable development, promote peace and security at home and around the world, strengthen inclusive, democratic governance.