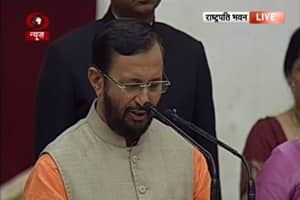 MoS (Independent charge) Environment Prakash Javadekar who was today elevated to the rank of a Cabinet minister in Modi government’s Council of Ministers, has bagged HRD Ministry.

Javadekar’s elevation comes, even at a time when his ministry is mired in controversy over whether it has withdrawn a Rs 200-crore fine imposed on Adani Ports. This fine had been imposed by the UPA government in 2012. NDA government has denied any such move to withdraw the fine.

The new faces will definitely demonstrate the intricate rainbow politics of caste combinations that the party is looking to woo.