With a modern hangar soon to be in place, operations of six new C-130J Super Hercules aircraft will begin from August next year at Panagarh Airbase in West Bengal, renamed Arjan Singh air force station. 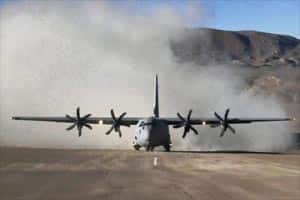 With a modern hangar soon to be in place, operations of six new C-130J Super Hercules aircraft will begin from August next year at Panagarh Airbase in West Bengal, renamed Arjan Singh air force station.

The new 87 squadron will start operations from the middle of August 2017, he said.

The airbase, which is under Eastern Air Command would oversee tactical and strategic air operations in eastern theatre with the Super Hercules aircraft.

He said the authorities are looking at support from Lockheed Martin, the US company which makes the Hercules aircraft, for developing the hangars, which will be made more user friendly and optimised for today’s requirements.

Once the infrastructure work at the air force base is finished by the end of next month, Chief of Air Staff will come to Panagarh to review the facilities.

Kumar said the air force station will be active in the years to come but refused to specify which aircraft will be deployed there in future.

Panagarh, he said, is important because of its strategic and locational capabilities as it is in the hinterland and not close to the border.

“We can keep our assets here and in case of any contingency our forces can be mobilised in any direction from here,” the Eastern Air Chief said adding since the air force station close to the industrial town of Durgapur there is no shortage of manpower.

Asked about security issues in the aftermath of the Pathankot attack, Kumar said the air force was working on adequate intelligence, refresher training for employees and upgrading equipment with new technology.

“We are also having better tie-up with external agencies like the Army, paramilitary forces and police,” he said,adding that local population is also being taken into confidence to get threat inputs.