The government has imposed a curfew on weekends and restricted public gatherings to contain the surge in COVID-19 cases, till January 19. 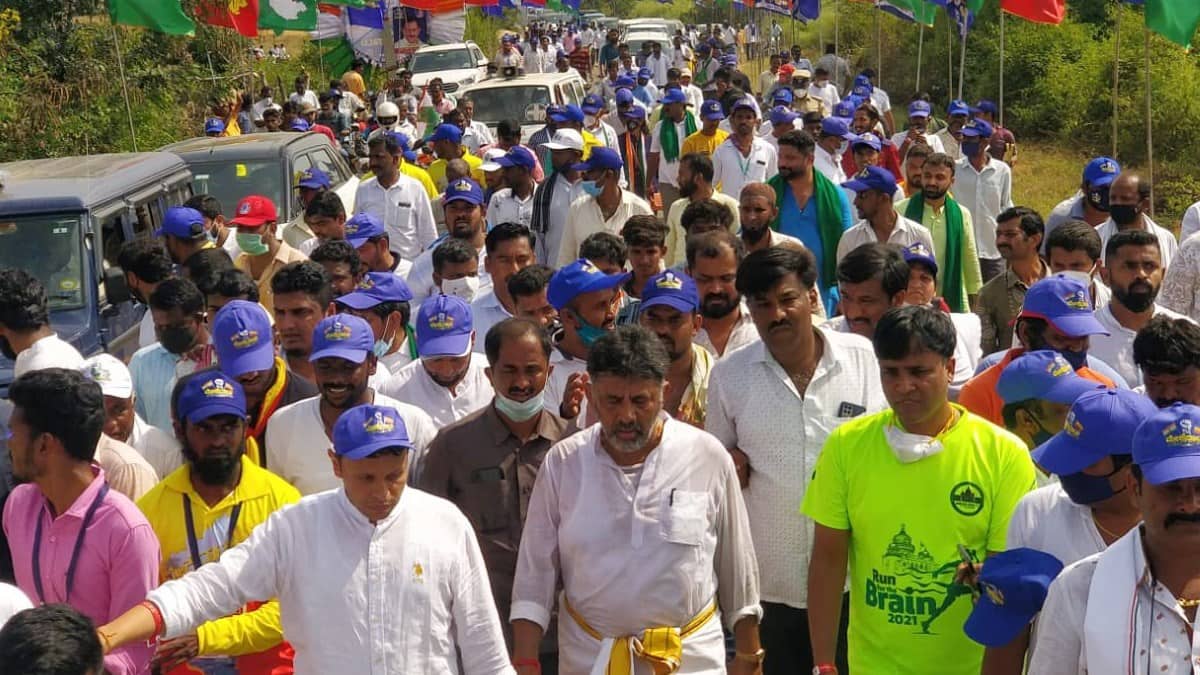 FIRs have been registered against nearly 30 Congress leaders and others at the Sathanur police station.

The Congress party’s decision to continue with its scheduled ‘padayatra’ (march) demanding implementation of the Mekedatu reservoir project across the Cauvery river in violation of the COVID-19 protocol has triggered a sharp reaction from the BJP-led Karnataka government. Senior Congress leaders including former CM Siddaramiah and state unit chief DK Shivakumar were booked by the police for taking out the protest march defying Covid-19 curbs. FIRs have been registered against nearly 30 Congress leaders and others at the Sathanur police station.

The government has imposed a curfew on weekends and restricted public gatherings to contain the surge in COVID-19 cases, till January 19. It has also prohibited all rallies, dharnas and protests, among others, as part of containment measures.

While Siddaramaiah returned to the city from the padayatra last evening due to fever and is likely to participate in the march from tomorrow, Shivakumar refused to get tested for the disease. Chief minister Basavaraj Bommai today said that the government will not differentiate between a common man or a big leader while considering any action.

“Further action will automatically follow with the case registered. Whatever action should be taken under particular sections, will be taken, it will definitely happen and there will be no differentiation in it. How much ever big a leader or a common man the person involved is, action will be taken in accordance with law,” said Bommai.

Karnataka’s minister for health, family welfare and medical education Dr K Sudhakar said that the Congress party has shown its true face by abusing the additional district collector who was just doing his duty. Reacting to DK Shivakumar’s behaviour, Sudhakar said that the state Congress chief has defamed the padayatra which is a form of Satyagraha. “The Congress is not doing a padayatra but a march to quench its thirst for power,” said Sudhakar.

A video of DK Shivakumar had gone viral on social media which showed him walking in an apparently inebriated state. The video was also shared on Twitter by BJP spokesperson Sambit Patra.

Meanwhile, Congress leaders and workers continued their march for the second day today, and are scheduled to cover a distance of about 15 km from Shivakumar’s native Doddalahalli to Kanakapura. The 10-day padayatra with the theme ‘Namma Neeru Namma Hakku’ (Our water, Our right) that began at Sangama, the confluence of Cauvery and Arkavathi rivers at Kanakapura in Ramanagara district yesterday under the leadership of Shivakumar and Siddaramaiah, will be spanning a distance of nearly 139 km.

Next Story
Governor vs government in Kerala: Here’s what has triggered a political storm in the state