MCD Elections 2022: Favourites among all political parties, Purvanchalis can sway one third of 250 wards

MCD Elections 2022: Purvanchalis account for around 30-35 percent of Delhi’s 2 crore population, translating into an approximate headcount of 70-75 lakh. 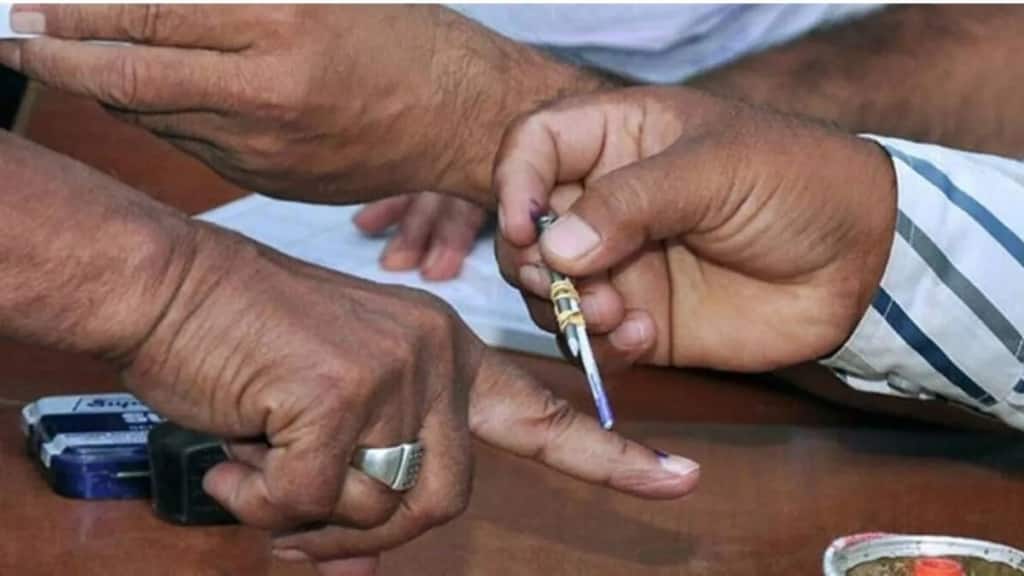 MCD Elections 2022: One-third of the total 1.46 crore voters are, according to an estimate, Purvanchalis. (Image: IE)

MCD Elections 2022: As evening gradually advances to night, argumentative minds put their best foot forward as a cocktail of broken Hindi, Bhojapuri and Maithili political discourse creates an oasis in the cosmopolitan culture of the largely English-speaking Delhi populace. Auto rickshaws on election campaigns chip in with slogans of “Zindabad Zindabad…” and teenagers run helter-skelter to pick the pamphlets dropped by them. Shop-owners on either side of the narrow road, meanwhile, are doing brisk business.

Unperturbed, the corner talk of the youth, mainly in their 20-30s, rotate around which candidate is best suited as Councillor of Madanpur Khadar, which falls in South-East District of Delhi, with a considerable presence of Purvanchalis who set the poll pitch in every election. It is the same ambience that one can find in Adarsh Nagar, Badarpur, Badli, Burari, Kundali, Karawal Nagar, Kirari, Laxmi Nagar, Mustafabad, Patparganj, Palam, Rithala, Trilokpuri, Sangam Vihar, Uttam Nagar and Vikaspuri areas of the national capital.

With Municipal Corporation of Delhi (MCD) elections just inches away, Bharatiya Janata Party (BJP), Aam Aadmi Party (AAP) and Congress are busy making last ditch efforts to drum up support among voters. For Purvanchalis, political parties of all hues develop a penchant whenever elections of any format approach in Delhi. Purvanchalis are referred to as those Delhi residents who are rooted in eastern Uttar Pradesh, Bihar and Jharkhand.

Purvanchalis account for around 30-35 percent of Delhi’s 2 crore population, translating into an approximate headcount of 70-75 lakh. The number forms a major vote bloc with the potential to swing the poll momentum either way. One-third of the total 1.46 crore voters are, according to an estimate, Purvanchalis. They, as poll experts feel, could decide the destiny of candidates in 75-80 of the 250 wards of the MCD.

As far as assembly segments are concerned, Purvanchali voters hold sway in more than two dozen constituencies. It is perhaps for this reason that local parties from Bihar, counting on support from Purvanchalis in Delhi, have entered into the electoral fray in the national capital. According to a rough estimate, Purvanchalis could be spotted in every constituency in Delhi and hold at least 10,000 votes in probably every constituency. It is this arithmetic makes Purvanchalis a consolidated vote bank and a favourite among political parties.

Purvanchalis have been treated as the traditional vote bank of the Congress. In public discourse, it is often said that Purvanchalis played a pivotal role in ensuring the 15-year stint of the Sheila Dikshit government in Delhi. During the Sheila regime, they were provided with places to dwell, schools, healthcare and other basic civic facilities. Till 2012, Purvanchalis majorly stood with the Congress.

Having lost ground following its decimation in the 2015 assembly elections, the Congress has now set sight on reclaiming its glory of yesteryears when it emerged victorious in the MCD thrice under Sheila Dikshit’s regime.

The party’s election manifesto titled “Congress Vision MCD-Meri Chamakti Delhi” underlines the achievements of the Congress during the tenure of Sheila Dikshit as CM.

Also, the grand old party released its ‘vision document’ stating that the MCD polls will provide an opportunity to replace both the BJP and AAP.

In a bid to woo Purvanchalis, Congress has promised to restore Chhath Ghats along the Yamuna river bank, a measure the Sheila government undertook and established Maithili-Bhojpuri academies. The party has fielded around 50 candidates hailing from Purvanchalis background.

Will Purvanchalis vote for saffron?

Despite being out of power in Delhi, the BJP has won MCD for three consecutive terms. The campaign trail for the upcoming polls has seen the BJP roll out its big guns including party president JP Nadda, and Defence Minister Rajnath Singh. Nadda set an emotional pitch by appealing to Purvanchalis, reminding them that he used to ask for Thekua of Chhath Puja during his childhood days spent in Bihar.

Experts believe that Purvanchalis, known to be sensitive to matters of religion and emotions, have shifted towards BJP when the Mandal-Kamandal politics kicked in. Purvanchalis are said to have played a key role in scripting the victory for BJP on all seven MP seats and its three-term MCD stint.

With its theme song for MCD polls: ‘Janta Ki Taiyyari Hai, Kejriwal Ki Baari Hai’, AAP seems to have ticked all the boxes in the battle to wrest the MCD crown from the BJP. Arvind Kejriwal has drawn Purvanchalis towards AAP since the formation of his government in Delhi in 2012 with freebies like free electricity and water and quality education in schools. Purvanchalis have rallied behind Kejriwal in assembly elections and played a key role in formation of the AAP government in Delhi.

They measure the performance of any political party by its functioning in governance. Purvanchalis have voted BJP in MP elections, supported AAP in assembly polls and stood behind the saffron party in MCD elections.
AAP has tried its best to solidify its Purvanchali vote base. The Kejriwal government has developed Chhath Ghats and arranged special camps for Kanwariyas, belonging majorly to Uttar Pradesh, Bihar, Rajasthan, Delhi, and Haryana. The Delhi government took several steps to promote Bhojpuri and Maithili in July 2019. The recent induction of senior Congress leader Mahabal Mishra in AAP could also add a spin to the party’s poll momentum. Mishra is said to wield considerable influence on Purvanchali people. AAP has also fielded around 50 candidates from Purvanchali background.