Ayush ministry may request the Union government to declare the International Yoga Day, which falls on June 21, as a public holiday… 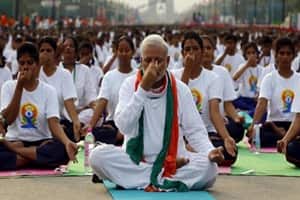 "It is not needed, nobody has demanded that. Last year, also no such demand came. But if the demand comes, I will request the Prime Minister to do so. (Reuters)

Ayush ministry may request the Union government to declare the International Yoga Day, which falls on June 21, as a public holiday if such a demand comes, Ayush minister Shripad Naik said today.

Speaking ahead of the second IYD celebrations, he said that his ministry would consider such a demand and request Prime Minister Narendra Modi in the interest of promoting a practice with multiple benefits to the masses.

“It is not needed, nobody has demanded that. Last year, also no such demand came. But if the demand comes, I will request the Prime Minister to do so.

“Yoga’s time is early morning. It will go on around 8 am. There is no need of a holiday but if there is a demand for that, we will request the government,” Naik said during National Health Editors’ Conference on the theme – ‘Yoga for Holistic Health – Recent Researches’ here.

June 21 this year falls on Tuesday while last year, it fell on a Sunday.

He also dismissed the controversy related to chanting of Om during the event and it has not been made compulsory.

“There is always some opposition whenever some good work is done. There is no opposition this year to it. We have not made it compulsory. Without OM, yoga cannot be complete. We have made those people who are opposing understand this and it seems they have understood,” he said.

A fresh controversy had broke out recently over the UGC’s directive asking universities and colleges to follow Ayush ministry’s yoga protocol that begins with chanting of ‘Om’ and some Sanskrit sholakas during Yoga Day celebrations on June 21.

Both the government and BJP, however had insisted that last year’s protocol has been maintained and no changes have been made. “There is no compulsion to chant ‘Om’,” the Ministry had earlier said.

Asked about the controversy which had erupted over performing of ‘Suryanamaskar asana, the minister said that this particular ‘asana’ had not been kept last year and this year, it will not be performed.

“The Surya namashkar asana, last year also we had not taken it. Its a complex exercise. It is difficult to do in 45 minutes and for people who are new to the exercise. Therefore we have not kept this one,” Naik said.

Ayush Ministry officials said that yoga has been added in the physical activity sessions in various schools for class six to tenth but it has not been made compulsory.

Naik said that a circular has also been issued by the HRD Minister to all the schools to include yoga and while many schools have adopted it, for others, “work is in progress”.

“HRD minister has sent circular to schools. Work is in progress. All schools have started adopting,” Naik said.

Asked about the total budget of the Ministry for this year’s celebrations, Ministry secretary Ajit Sharan said that every ministry is spending its own money and Ayush Ministry is not supporting anybody in terms of funds for celebrating this.

“Although if all is taken collectively, it may be hundreds of crores. But from the AYUSH Ministry side, the sum is around Rs 15 crore,” he said.

Naik said that most of the modern day health problems are because of faulty life-style and yoga is an “efficacious” means to overcome these disorders.

“The uniqueness of therapeutic benefits of Yoga is that it can work along with any other drug systems of healthcare and this enables the practitioners of other systems of medicine, including modern medicine experts to prescribe Yoga programme to the patients,” he said.

He said that multi-faceted benefits of Yoga in physical, mental, emotional, social and spiritual well-being of a person and its long term benefits to the people from all walks of life have been established by large number of inter-disciplinary researches in different fields.

Naik said that there are a number of research works conducted all over the World on different aspects of Yoga and its utility in the promotion of health, prevention and management of various disorders, besides improvement in the physiological functions of the body.