The civic polls results are eagerly awaited both by ruling BJP in the state and the opposition parties including Samajwadi Party, Bahujan Samaj Party and the Congress. 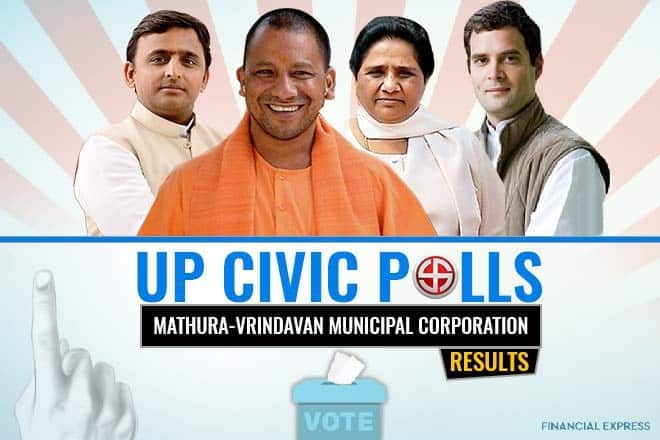 Mathura Municipal Corporation Nagar Nigam Elections, Mayor Poll Results 2017: The results of municipal corporation elections in Uttar Pradesh were declared. BJP candidate Mukesh Arya has won the Mayoral seat from Mathura. Mukesh Arya managed to get 41,222 votes and emerged victorious while Congress candidate Mohan Singh got 4,706 lesser votes and came in second place with 36,516 votes. Mathura is a sacred city and Lord Krishna is said to have been born on the site of Sri Krishna Janma Bhoomi, a Hindu temple. There are 25 ghats in the city around the Yamuna River of which Vishram Ghat is considered the holiest.

The Yogi Adityanath government, soon after assuming office in March, had constituted two municipal corporations of Ayodhya and Vrindavan-Mathura. The election campaign had generated a lot of interest as the ruling BJP left nothing to chance. Mathura and Vrindavan municipal boards now constitute the Mathura Nagar Nigam and this is the first election of the recently merged board.

In a nail-biting contest, BJP and Congress both get 874 votes in Ward no.56 in Mathura. The winner was decided by a lucky draw. The drawn chit had BJP’s Meera Agarwal’s name. Thereby, the candidate for Mathura’s Ward number 56 Meera Agarwal won the election.

#WATCH BJP and Congress both got 874 votes in Ward no.56 in Mathura. BJP’s Meera Agarwal was declared winner after a lucky draw #UPCivicPolls2017 pic.twitter.com/N6QStG3a7F

The final result of Mathura would be updated soon.