Manohar Parrikar in Rajya Sabha: 8 points he made to tear into Congress defence on AgustaWestland VVIP chopper scam

Manohar Parrikar quoted an ‘Akbar-Birbal’ story while replying to the debate in Rajya Sabha on the AgustaWestland chopper controversy. 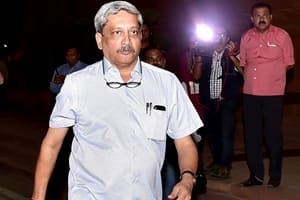 We take a look at eight crucial points in the AgustaWestland debate, as elaborated by Parrikar in the Parliament. (PTI Photo)

Tearing into Congress’ defence in the AgustaWestland controversy, Defence Minister Manohar Parrikar on Wednesday said, “When the brief is very weak, even the best advocate can’t win the case.”

Replying to a debate in Rajya Sabha on the controversy surrounding the Rs 3600 crore deal for 12 VVIP helicopters, Parrikar mocked, “I remember an Akbar-Birbal story. When Akbar’s golden spoon was stolen, Birbal gave a bamboo stick to all servants and told them that the one who stole golden spoon will be caught because his bamboo stick will grow overnight. The thief, out of fear, cut his bamboo stick and was thus caught. They (UPA) have cut all their bamboos in their argument.”

We take a look at eight crucial points in the AgustaWestland debate, as elaborated by Parrikar in the Parliament:

1) Invisible hand at work: Parrikar suggested the role of an “invisible hand” in preventing a proper investigation in the chopper scam. Parrikar said CBI had registered a case on March 12, 2013 but it did not bother to forward a copy of the FIR to ED for nine months.

Later, ED did not act on the FIR till July 2014, he said. “It appears an invisible hand was guiding action or inaction of CBI and ED,” the Minister said.

The people need to know who instigated, who supported & who benefitted from the Augusta deal.

2) Delayed cancellation of contract: Parrikar also quoted from a file about IAF’s noting about chopper flights in Gulmarg and Srinagar, which he said was “luckily saved from devastating fire” on June 3, 2014.

“It was kept in an officer’s drawer rather than in open,” the Defence Minister said. Parrikar alleged that instead of taking action against the company, the UPA wrote to the external affairs, embassy and the court.

“It took nearly two years to cancel the contract and that too primarily as a response to an arbitration request by the supplier. In fact the delivery of the first three aircraft could have been avoided,” he said.

At various stages, despite specific directions to the contrary, acquisition process was influenced to make Agusta the only eligible bidder.

“There must be robust rationale for deviation from policy,” Parrikar said. “The benchmark cost given was unreasonably high and had provided no realistic basis for price negotiations,” he added.

5) Requirements changed: He said that at various stages from March 2005, despite specific directions to the contrary, requirements were changed and processes influenced to make AgustaWestland the “only alternative”.

Parrikar said “unusually large number of deviations approved, counter-party to supply agreements and exceptional dilution of FET standards”. He added that there was suspected benchmarking of procurement costs which may have led to acceptance of materially overpriced supply agreements.

6) Antony admitted corruption took place: A number of steps were taken by the UPA government from 2005 onwards that resulted in the acquisition of AW helicopters. These steps then became a subject of CAG scrutiny. AK Antony himself admitted that there was corruption in the deal. Sadly, this controversy has also damaged India’s global image.

He said CBI has already done a lot of investigation and is currently on the money trail to track down where the bribe money went.

Parrikar said there was “relentless push” by the UPA to go in for the AgustaWestland choppers.