Banerjee yesterday visited the Siddhi Vinayak temple and also paid her respects at the memorial of police constable Tukaram Ombale who died fighting terrorists during the 2008 Mumbai terror attack. 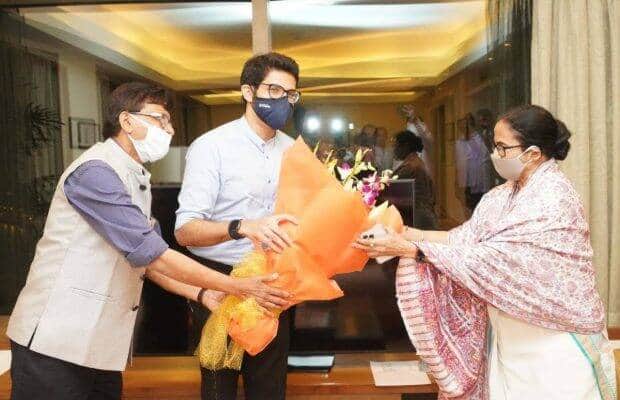 West Bengal Chief Minister Mamata Banerjee is set to meet Nationalist Congress Party chief Sharad Pawar in Mumbai today. Ahead of the high-profile meet, Shiv Sena MP Sanjay Raut said that Banerjee calling on Pawar is a big deal and something good will come out of the meeting.”Mamata Banerjee’s meeting with Sharad Pawar is a big thing. Sharad Pawar is the tallest and most experienced leader of this time. If he guides her and a discussion takes place, then surely something good will emerge out of it. We all have to come together and fight (BJP),” said Sanjay Raut.

Banerjee yesterday met Shiv Sena leaders Aaditya Thackeray and Sanjay Raut in Mumbai. Banerjee, on a visit to Maharashtra, was scheduled to meet Chief Minister Uddhav Thackeray earlier, but met his son Aaditya due to the CM,s ill-health. The meeting is being seen as part of an outreach by the TMC to form a united opposition against the BJP.

Banerjee yesterday visited the Siddhi Vinayak temple and also paid her respects at the memorial of police constable Tukaram Ombale who died fighting terrorists during the 2008 Mumbai terror attack.

After its thumping victory in West Bengal earlier this year against an aggressive BJP, the TMC has been working to make its presence felt across India. Banerjee has been touring the poll-bound states to establish the TMC as a national party and an alternative to the BJP.

The BJP, however, said that the West Bengal CM’s attempts to expand the TMC’s national footprint have not gone down well with the people of Bengal. “Who is with Mamata Banerjee? She has just gone to Maharashtra, it is a good thing, she needs a chance to wash off the sins of the violence and killings that are happening in Bengal. I don’t think she will find any big leaders there. All big leaders have maintained a distance from her…Mamata Banerjee is doing the politics of dominating everyone. She can go anywhere, be it Goa, Himachal or Uttar Pradesh but she will get nothing. People of Bengal are not happy with the efforts being made to spread the TMC across the country by looting Bengal,” alleged BJP National Vice President Dilip Ghosh.

It may be recalled that the TMC, which is pitching itself as the primary opposition party on the national level, has already announced that it will contest the upcoming Goa elections. In Meghalaya, the party has managed to get 12 Congress MLAs including former CM Mukul Sangma to defect to the TMC, and emerge as the principal opposition party in the state.