Trinamool Congress Chief Mamata Banerjee took oath as he Chief Minister of West Bengal today. TMC on May 19 had put up a stunning victory in West Bengal Assembly Elections 2016 by winning 211 seats out of a total of 294. 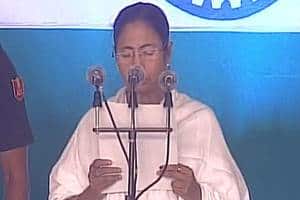 In her maiden address to the state Assembly post her spectacular return to power, the chief minister said state funding of elections would curb use of black money in polls. (PTI)

12.45pm: MLAs take their respective oath before the Governor of West Bengal

Mamata Banerjee met Governor Kesari Nath Tripathi on Thursday to submit the list of 42 MLAs who will take oath with her at Red Road, Kolkata at 12.45pm. Former Indian cricketer Laxmi Ratan Shukla, Kolkata Mayor Shovan Chatterjee,  and singer Indranil Sen are among the 17 new faces in Didi’s 42-member ministry.

Rise & Shine. Some day I will tell my grandchildren I was there at Red Road #Kolkata on 27 May 2016 #DidiTakesOath

Announcing that the swearing-in-ceremony was dedicated to ‘Ma, Mati, Manush (mother, land and people)’, TMC supremo said 19,000 chairs would be kept for the ordinary people, who can occupy them on first-come, first-served basis. The state government has also made arrangements for giant screens to be installed on roads. At least 30 giant ACs are expected to keep the VVIP sitting area cool, while pedestal fans will be placed for the common people.

Trinamool Congress on May 19 put up a stunning victory in West Bengal Assembly Elections 2016 by winning 211 seats out of a total of 294. An analysis of the results indicated that the party’s vote percentage also increased compared to 2011 Assembly poll and 2014 Lok Sabha elections. During the last Assembly polls, which led to the fall of the 34-year-old rule of the Left Front government, Trinamool had won 184 seats in alliance with Congress.

It was for the first time in 49 years that Trinamool Congress without any alliance has come to power in the state.

“The alliance of Congress and Left Front is an open book while Modi-Didi (Narendra Modi and Mamata Banerjee) are having a tacit understanding. In Bengal, the political equation has changed,” said West Bengal Congress president Adhir Chowdhury  while addressing Left workers at a protest rally at Kolkata on Thursday.

The opposition in the state – the Left Front, Congress and the BJP – will boycott the function in lieu of alleged violence perpetrated on them by the Trinamool.