Malala Yousafzai says she is heartbroken’ about the attack on a school in Pakistan that has claimed more than 125 lives, including many students. 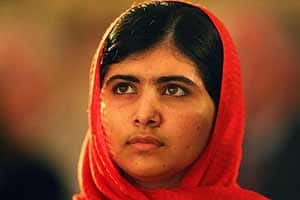 The 18-year-old Pakistani teenager who survived a shot to the head by the Taliban had relived the incident and her life in the Swat Valley in 'I am Malala', co-written with 'Sunday Times' journalist Christina Lamb. (Reuters)

Malala Yousafzai says she is ”heartbroken” about the attack on a school in Pakistan that has claimed more than 125 lives, including many students.

The Nobel Peace Prize winner said in a statement Tuesday that ”innocent children in their school have no place in horror such as this.”
She said she and millions of others ”mourn these children, my brothers and sisters – but we will never be defeated.”

The 17-year-old was shot in the head by the Taliban in Pakistan two years ago as punishment for speaking out for a girls’ right to education. She recovered after several operations and is now living and attending school in Birmingham, England.

Malala said she stands ”united” with the government and armed forces of Pakistan in their response to the attack.
