Mainpuri Lok Sabha byelection: ‘Mulayam’ card may not be enough for Dimple Yadav to sail through in SP’s backyard

The SP had announced the name of Dimple Yadav, wife of party chief Akhilesh Yadav, as its candidate for the Mainpuri parliamentary seat on November 10. 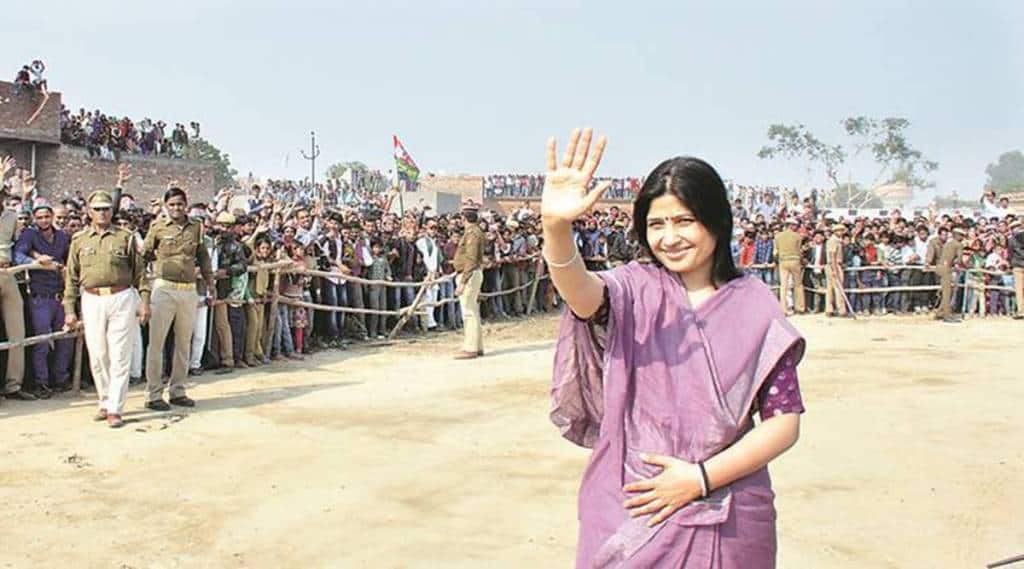 The SP had announced the name of Dimple Yadav, wife of party chief Akhilesh Yadav, as its candidate for the Mainpuri parliamentary seat on November 10. (File photo: IE)

Winning the Mainpuri bypoll will not be a simple affair for SP’s Dimple Yadav unlike the past elections when her father-in-law Mulayam Singh Yadav used to register effortless victories, some local residents feel. But many are of the view that she will make it, particularly because of the public sympathy for the veteran Samajwadi Party leader who died recently.

The SP had announced the name of Dimple Yadav, wife of party chief Akhilesh Yadav, as its candidate for the Mainpuri parliamentary seat on November 10. “The bypoll will certainly not be simple for Dimple Yadav as the BJP is making all efforts to snatch the seat from the SP. A large number of BJP leaders are already camping in the city,” businessman Dhirendra Kumar Gupta told PTI. At the same time, Gupta said, the going will not be easy for the saffron party as its candidate Raghuraj Singh Shakya is meeting and greeting the voters as a formality. Unless the BJP workers don’t undertake door-to-door campaigning, it will be tough for Shakya to win, he said.

“There cannot be any comparison between ‘neta ji’ (Mulayam Singh Yadav) and his son Akhilesh Yadav, as the former knew each of his voters. But the Yadavs are more or less visiting each and every house in the constituency to ensure that they emerge victorious in the bypoll,” he said. Gupta asserted that the bypoll is the battle of ‘asmita’ (identity) for the Yadav family.

The businessman further said that if the local BJP workers fail to make a connection with the voters, then bringing senior leaders, including ministers from Lucknow, for campaigning will have very less impact. For hotelier Hemant Pachauri, the upcoming bypoll is the best possible opportunity for the BJP to breach the SP fortress of Mainpuri due to the absence of Mulayam Singh Yadav or ‘neta ji’ to his legions of supporters.

“If the SP loses the seat this time, it will prove to be the last nail in their political coffin. When in power, the SP had unleashed hooliganism in the city and people were feeling harassed. Now, the scene has changed. “This bypoll is a fiercely contested one. At this point in time, it is difficult to say who will win or who has the edge. Things are different this time, especially in the absence of neta ji,” he said.

“In the 2019 Lok Sabha election, neta ji had made an emotional appeal to the voters of the constituency urging them to vote for him and he won by a margin of around 94,000 votes with even the BSP supporting him. In the elections prior to 2019, neta ji’s victory margin was in lakhs,” Pachauri said. Local trader K K Gupta, however, said there is “no sympathy” for Dimple Yadav as people were fed up with the misrule of the SP when it was in power. “They heaved a sigh of relief after the BJP government came to power in the state, and the criminals were arrested. Since then, there has been a dip in crimes,” he claimed. Resident Bhupendra Singh too ruled out a sympathy wave for the SP and said the BJP will “create history” in the bypoll and win the seat.

“The sympathy for Akhilesh Yadav vanished the day he took over the reins of the party from his father following a feud in the family. There is absolutely no sympathy for him, Dimple or for the SP,” he claimed.However, Shyam Bahadur Yadav, a self-proclaimed ‘Samajwadi tapasvi’ rejected the observations, saying people of Mainpuri are extending wholehearted support to the SP in general, and the “Saifai family” (Yadavs) in particular.

“It is the people of Mainpuri, who are fighting the elections (against the BJP). The elections are important as they are being held after the demise of ‘neta ji’… the people of Mainpuri will elect Dimple and send her to Lok Sabha,” Yadav told PTI. Asked whether SP’s door-to-door campaigning will be any match for the BJP’s high-tech canvassing, the 50-year-old said, “The BJP indulges in high-decibel campaigning, and it is their only work. They are liars and are always flaunting. They play (songs on) the DJ, while we silently go from one house to another.” A resident of Kishni assembly constituency, Pushpendra Singh said Mulayam Singh Yadav had done a lot of work like constructing roads, schools, and hospitals and ensuring water and electricity supply for the people of the constituency. “What has the BJP done for the people of this place?” he said.

Reacting to the BJP accusing the SP of indulging in dynastic politics, he said there is no ‘parivaarvaad’ in the party.Rishi Yadav (17), a student of BSc first year from Karhal assembly segment, who aspired to join the Indian Air Force, said, “Though I will be voting in the 2024 Lok Sabha elections, I am closely watching the election campaign and the SP is going to win the bypoll.” “From roads to expressways, whatever we have got, it is only due to neta ji. The young voters have shown their inclination towards the SP, and Dimple Yadav will win the bypoll with a greater margin,” he said.When asked to comment on BJP’s allegations of crime reigning supreme during the SP regime, Rishi Yadav said crimes are being committed even now.

“In fact, they have only increased (under the BJP),” he claimed. Akhilesh Yadav represents the Karhal assembly seat, which is part of the Mainpuri Lok Sabha constituency. Polling in Mainpuri will be held on December 5 while the counting of votes will take place on December 8.