Wildlife Institute of India (WWI) scientist Habib dismissed the crossing saying that it was “a question of behaviour” as perhaps he crossed the highway possible due to no traffic. 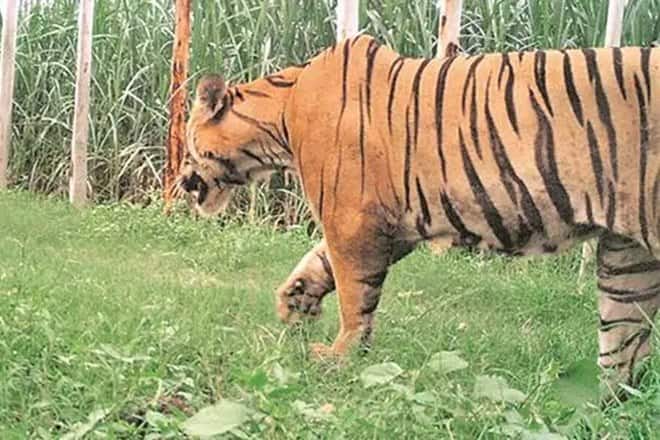 In a departure from the observations of wildlife activists pointing out that that nine underpasses on the NH-44 in Maharashtra were not adequate after a slew of accidents, a fresh study points to encouraging results with several species of animals making use of the underpasses during the months of March, April and May this year. As per a report by Bilal Habib, Wildlife Institute of India (WWI) scientist and his team, 17 species of animals began using these underpasses which were built along the 16-km patch of forest along the Maharashtra side of the highway.

Among those species, tigers have been the most frequent users of at least one of the underpasses, finds the report which is part of the study titled ‘Ecological impact assessment of existing and proposed road infrastructure in important wildlife corridors in India’.

Besides the frequent accidents on the four-laned NH-44 in Maharashtra which left an 11-year-old tiger dead in February and killed two people as their vehicle tried to avoid a wild boar last week, criticism mounted when a video of a tiger from the Pench reserve crossing the highway in daylight surfaced.

Taking these incidents as examples, Wildlife activists pointed towards the inadequacy of the nine underpasses constructed by the National Highways Authority of India (NHAI), as per the orders of the Bombay High Court, for animals for safe their passage avoiding the highway.

The recent study, besides revealing that the underpasses were being used by animals, pointed towards the animals showing “peculiar behavioural patterns” which could help a great deal in coming up with mitigation measures needed in other similar projects. For example, during March and May, the study done with the aid of 74 trap cameras revealed that although some animals used the underpasses to pass through, some stuck to using them for playing or resting as such. In another instance, T1 used Animal Under Pass (AUP) 9 at least two times. The study also found that a sloth bear took two months to make a decision if it would use the underpass.

Most of the animals used the underpasses during the night, the report by Habib and his team reveals. Apart from that, the report also showed 27 events involving 11 individual tigers using AUPs 3, 4, 7, 8 and 9 that the big cats used AUP 8 the most, using it 20 times at least.

“These are the first-ever wildlife mitigation measures in the country and the world’s biggest. Our study has found that 17 species have started using them… Tigers have been preferring the AUPs, which is very reassuring,” Habib was quoted as saying in The Indian Express report.

However, seeing that 264 livestock along with 10,493 people also made use of the AUPs during the same period, Habib feels that movement of non-wildlife should be restricted in order to exploit the full potential of these underpasses.

He is also very positive over two specific events that included individual tigers using these underpasses which Habib predicts could be the entire tiger populace around the NH 44. The seond development, he says, took place at 10 am last Sunday, when AUP 8 saw a first-of-its-kind event – a pack of 5-6 wild dogs killing a chital (spotted deer).

In a tedious legal battle demanding suitable mitigation measures from the Nagpur bench of the Bombay High Court, activists accused the Wildlife Institute of India of giving in to the pressure from the NHAI and building smaller underpasses than originally had been suggested.

Last week, travellers on the newly four-laned NH-44 in Maharashtra recorded a startling video. It showed T1, a tiger from the Pench reserve, crossing the highway in daylight.

After last week, the daylight video of T1 crossing surfaced, the High Court ordered the litigants and their advocates to pay a visit to the underpasses accompanied by the officials of NHAI and Forest Department to assess the state of affairs. The combined team reportedly visited the area on Saturday.

Habib dismissed it saying that it was “a question of behaviour” as perhaps he crossed the highway possible due to no traffic. “Every animal has its own calculation and response to a situation,” Habib added.

What activists say
Udayan Patil, a member of Srushti Paryavaran Mandal, which was the first to oppose the four-laning, told Indian Express that there are some problems such as stacking of construction material and water accumulation inside the AUPs. Patil also said that the guiding walls need to be of suitable height. As for the validity of the WII’s report on the adequacy of the underpasses, he said that there is a need to cross-check with the data with that released by independent agencies.

What forest reserve official says
“Overall, the mitigation measures have started bearing fruit”, Pench Tiger Reserve (PTR) Field Director Ravikiran Govekar says. However, he adds that it is premature to arrive at a conclusion, saying that the Wildlife Conservation Trust (WCT) has also been approached to do their own study. The research has to be undertaken for about a year so that the pluses and minuses of the mitigation measures can be fully understood.