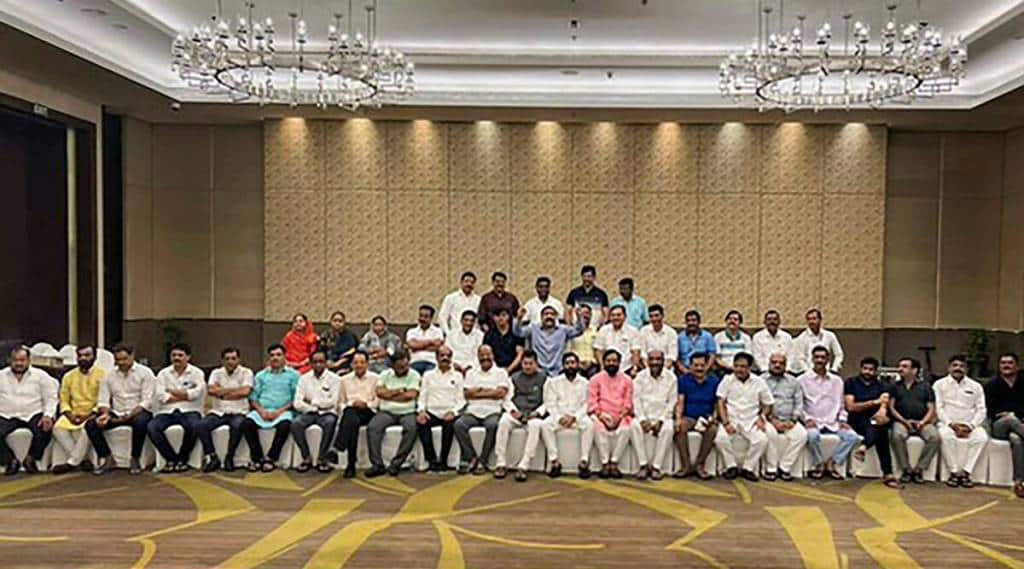 Maharashtra Political Crisis Live News, Uddhav Thackeray, Eknath Shinde Live Updates: In a second letter to the Maharashtra Assembly’s Deputy Speaker Narhari Zirwal, 37 MLAs from the ‘rebel’ Shiv Sena camp have pledged their support to Eknath Shinde once again. The ‘rebel’ legislators have demanded that Shinde be made the leader of Shiv Sena and Bharatshet Gogawale be made the Chief Whip of Shiv Sena. After the Uddhav Thackeray camp sought the cancellation of ‘rebel’ Shiv Sena MLAs, Shinde hit out saying that his followers wouldn’t be scared by such threats of disqualification. Meanwhile, Shinde has claimed the support 50 MLAs, including 40 legislators from Shiv Sena, according to many reports.

With rebels refusing to back down and numbers clearly not in his favour, Maharashtra Chief Minister Uddhav Thackeray vacated his official residence ‘Varsha’ and moved back to his family home ‘Matoshree’ late on Wednesday night. This came hours after he offered to quit amid the rebellion by Shiv Sena leader Eknath Shinde, who continues to flex muscles asking Shiv Sena to break ties with the Congress and NCP, and realign with the BJP to form government in Maharashtra. Sanjay Raut, however, asserted Thackeray will not resign following the rebellion and maintained the ruling Maha Vikas Aghadi (MVA) will prove its majority in the Assembly if required. In a major setback to the MVA alliance, Shinde has prepared a list of around 400 former leaders, including MPs and corporators, who were ready to join the ‘rebel’ camp. This development comes right ahead of the civic body polls, which will be held in three months’ time.

On Thursday, seven more MLAs joined the Shinde camp in Guwahati, including three Sena legislators who arrives today morning and four others last night. The rebel Sena leader has already claimed support of 46 MLAs, including six ministers, pushing the MVA government into survival crisis. A plea filed in the Supreme Court has sought a crackdown on all MLAs who indulge in defection. It also sought the top court’s directions to restrain defecting MLAs from contesting elections for five years.

In a meeting of Shiv Sena's rebel MLAs, they have planned to take a resolution to oust Deputy Speaker Narhari Zirwal. Action is being taken to prepare for the Motion with the signature of 46 MLAs of the rebel group. (ANI)

Shiv Sena MLA Bhaskar Jadhav on Friday asked party leader Sanjay Raut to communicate with the rebel legislators instead of “challenging” them.

“Communicate with the rebels, find out if their grievances are genuine. Differences can be resolved through communication,” Jadhav, MLA from Chiplun, told reporters.

Jadhav is one of the few MLAs who have not joined the rebel camp led by senior Sena leader and Maharashtra minister Eknath Shinde. (PTI)

“Don't hold up important development works related to welfare of people. Get in touch with me directly,” Thackeray said during a review meeting attended by divisional commissioners, district collectors, municipal commissioners and secretaries of government departments at the state secretariat. The CM told the bureaucrats that citizens' grievances should be addressed without any delay.

Thackeray said, “There is always uncertainty in politics and during the monsoon season. Political manoeuvres will go on but governance shouldn't stop. The administration should ensure that people' s day-to-day issues are resolved immediately.” A statement from the Chief Minister's Office said at the meeting, the CM reviewed the current COVID-19 situation in the state, sowing operations for kharif crops, availability of urea, disaster management preparedness, facilities for warkaris (devotees) at Pandharpur temple town for the upcoming 'Ashadhi Ekadashi' festival. (PTI)

“I'll always be a Shiv Sainik &never betray Shiv Sena. I had to take this step because of several reasons. Voters of Byculla assembly will understand this. When I was diagnosed with cancer, no senior leader of the party came to see me,” says Yamini Jadhav, rebel Shiv Sena MLA from Byculla (ANI)

All Police stations in Maharashtra, especially those in Mumbai, have been ordered to remain on high alert. Police received info that Shiv Sainiks can take to the streets in large numbers. To ensure that peace prevails, Police have been asked to remain alert: Maharashtra Police (ANI)

“They (Eknath Shinde faction) say that they are Shiv Sena. So Shiv Sena+NCP+Congress together, we have a majority,” says Maharashtra Deputy CM and NCP leader Ajit Pawar (ANI)

Talking to reporters, Shiv Sena MP Vinayak Raut said Thackeray, who heads the state environment and tourism ministries, will address the party office-bearers at the Shiv Sena Bhavan, its headquarters at Dadar in central Mumbai, in an attempt to ensure that there is no confusion in its rank and file.

“He will address the district chiefs and 'sampark pramukhs' (liaison heads) at the Sena Bhavan,” he said, adding that the party firmly stands behind Chief Minister Uddhav Thackeray. (PTI)

“From the day Uddhav Thackeray took over as Maharashtra CM ,BJP is using all its resources, muscle power, with a single objective to oust him from power… MVA govt is gradually earning the trust of the common people but it can't be digested by BJP,” Congress' Adhir Ranjan Chowdhury told news agency ANI.

Shinde's road to supremacy is fraught with complex challenges that will test his patience and his ability to keep his flock intact, suggests former Chief Election Commissioner SY Quraishi. In an exclusive interaction with Financial Express Online, Quraishi delves into the possibilities and breaks down the complexities involved in a scenario where the Election Commission of India may have the final word. Read More

“I invite MLAs from all over the country to visit Assam. How can I stop people from coming to a hotel? Can I tell you not come to a hotel in Assam because there is federal structure in the country? I am happy when anyone comes to Assam, they can stay as long as they want,” Himanta Biswa Sarma told news agency ANI.

Shinde released pictures of 38 MLAs who are backing him.

Earlier, Eknath Shinde was “removed” from the same post by Shiv Sena.

After Sanjay Raut had claimed that the disqualification process for 12 MLAs were underway, the Shiv Sena has added 4 more 'rebel' MLAs to the list sent to the Deputy Speaker.

Calling it “unfair and unacceptable,” Congress MLA Bhupen Kumar Borah slammed the Himanta Biswa Sarma government for hosting MLAs from the rebel Shiv Sena camp, while saying that the Assam government's focus should have been on the flood situation

No Central minister is giving threats. BJP is not trying to destabilise the government. This is an internal matter of the Shiv Sena. BJP is only in wait and watch position, MoS Railways and BJP leader Raosaheb Patil Danve on Maharashtra political crisis. (ANI)

Threats are being given to Sharad Pawar ji by a Central minister. Do such threats have the support of Modi Ji and Amit Shah Ji?…We are taking action to disqualify the (rebel) MLAs: Shiv Sena leader Sanjay Raut (ANI)

Eknath Shinde will soon be meeting the other legislators from the 'rebel' camp at the Guwahati hotel to decide the next course of action. (IE)

“Process underway to disqualify 12 MLAs (of Eknath Shinde faction), their numbers are only on the papers. Shiv Sena is a big ocean such waves come and go,” says Shiv Sena leader Sanjay Raut. (ANI)

Saying that such battles are fought either on the streets or through law, Shiv Sena MP Sanjay Raut said that Sena workers are ready to come out when the need arises.

Responding to the disqualification demands made by the Uddhav camp, Shinde, in a series of tweets, wrote, “There are several Supreme Court decisions in this regard. Who are you trying to frighten? We understand your games and law as well. You can't ask for action against 12 of our MLAs because we are loyal to Balasaheb Thackeray and are the real Shiv Sena and Shiv Sainiks. In fact, we demand action against you for forming a group despite having no numbers.”

“A central minister of the BJP has said that if attempts are made to save MVA govt, then Sharad Pawar will not be allowed to go home. Whether or not the MVA govt survives, use of such language for Sharad Pawar is not acceptable,” tweets Shiv Sena leader Sanjay Raut.

In a video, Shinde, while addressing to rebel MLAs camping with him in Guwahati, saying, “Our worries and happiness are the same. We are united and victory will be ours. There is a national party, a 'mahashakti'…you know they vanquished Pakistan. That party has said that we have taken a historic decision and assured to provide all help.”

Wondering how Shinde and other MLAs managed to escape, Deputy Chief Minister Ajit Pawar called it “an intelligence failure.”

It is the responsibility of all the three parties (NCP, Congress and Shiv Sena) to save the government. Only Sanjay Raut knows why he made such a statement (Shiv Sena mulling to exit MVA): NCP leader and Maharashtra Deputy CM Ajit Pawar (ANI)

After 'rebel' MLA Kailash Patil returned to the Uddhav camp, 'rebel' MLA Tanaji Sawant claimed that 'Patil is trying to gain the sympathy of Matoshree.'

“Discussions can lead the way. There can be discussion. The doors of the house are open. Why does the forest wander? Let's decide with self-respect rather than slavery! Jai Maharashtra!,” tweeted Shiv Sena leader Sanjay Raut.

“If what Sanjay Raut said is correct…if they (Shiv Sena) want to go on that path (exit MVA) then they should talk to our leader NCP chief Sharad Pawar. Nobody can stop them, every party can go on their own path,” NCP leader Chhagan Bhujbal on Shiv Sena mulling exiting MVA. (ANI)

BJP and Centre fully responsible for destabilising a stable govt in Maharashtra to form their own govt in the state. They're also doing this for Presidential polls. I want to say that we all (Cong, NCP, Shiv Sena) will strengthen Maha Vikas Aghadi, says senior Congress leader Mallikarjun Kharge. (ANI)

“Maharashtra Vikas Aghadi is a government established for the development and welfare of Maharashtra. We will stand firmly with Uddhavji Thackeray till the end,” tweets NCP leader Jayant Patil.

“We're with them (Shiv Sena) to stop BJP from coming to power. This game is happening due to ED…Congress is ready for Floor test. We're with MVA & will remain. If they(Shiv Sena)want to form an alliance with anyone, we don't have a problem,” Maharashtra Congress chief Nana Patole tells news agency ANI.

A day after Deshmukh reached Nagpur, he claimed that he only got to know about the conspiracy against Uddhav Thackeray government after he reached Surat with the other defectors.

After Shiv Sena MLA Nitin Deshmukh alleged that he was taken against his will, the 'rebel' Shiv Sena camp posted pictures of him with the other defectors.

MLAs should not communicate from Guwahati, they should come back to Mumbai and discuss all this with CM. We are ready to consider exiting out of MVA if this is the will of all MLAs, but for that, they have to come here & discuss it with the CM: Sanjay Raut

With Eknath Shinde claiming support of 40 Sena MLAs, Uddhav Thackeray is not only set to lose the CM post but also his hold over Shiv Sena.

Reports suggest that the Congress and NCP chief Sharad Pawar — partners in the MVA alliance government — have suggested that rebel Eknath Shinde be named as Chief Minister as a way out of the huge political crisis. Shinde, on the other hand, said that it is “imperative” for Shiv Sena to walk out of the “unnatural alliance” with NCP and Congress to save the party and its workers.