Maharashtra Crisis LIVE: Eknath Shinde has challenged Shiv Sena’s move to disqualify him and 15 other MLAs in the Supreme Court. The matter will be heard today. 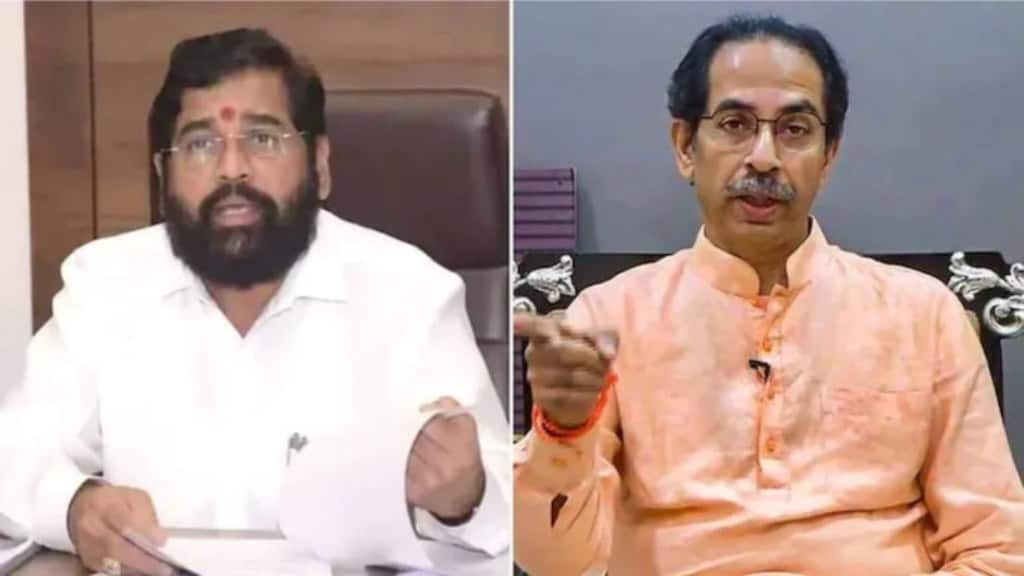 Maharashtra MVA Crisis Live News, Eknath Shinde Latest News: The Supreme Court is hearing two petitions filed by rebel Shiv Sena minister Eknath Shinde camp challenging the disqualification notice issued by the deputy speaker to him and 15 other rebel MLAs, calling the action “illegal and unconstitutional” and seeking a stay on it. A vacation bench of Justices Surya Kant and J B Pardiwala is hearing Shinde’s plea seeking directions to the deputy speaker to not take any action in the disqualification petition against him.

The Supreme Court on Monday issued notice to Deputy Speaker Narhari Zirwal, Chief whip Sunil Prabhu and leader of Legislature party Anil Choudhari and the Centre on Eknath Shinde's petition challenging the disqualification notices issued to him and 15 other rebel MLAs last week. The top court will now hear the matter on July 11.

14:24 (IST) 27 Jun 2022
Atmosphere not conducive for us to exercise our rights in Mumbai: Eknath Shinde’s advocate in SC

On being asked why the rebel camp had not approached the Bombay High Court with their plea against the disqualification of MLAs and the appointment of Ajay Chaudhary as Shiv Sena party group leader, Eknath Shinde's lawyer told the Supreme Court: “A minority of the legislative party is subverting the state machinery, attacking our houses. They're saying that our dead bodies will return from Assam. The atmosphere is not conducive for us to exercise our rights in Mumbai.”

Senior advocate Neeraj Kishan Kaul appearing for Eknath Shinde and others says threats have been given to these MLAs and it was said that bodies of 40 MLAs will arrive back.

Supreme Court asks Shiv Sena leader Eknath Shinde why he has not approached the High Court with his plea against disqualification notices issued to him and other rebel MLAs.

A meeting is underway at Raj Thackrey’s residence where all senior party leaders are present. The meeting comes after reports of telephonic conversation between Raj Thackeray and Eknath Shinde.

The Enforcement Director has summoned Shiv Sena MP Sanjay Raut on Tuesday for questioning in a money laundering probe linked to the re-development of Mumbai’s Patra Chawl. Read More

Maharashtra CM Uddhav Thackeray reshuffles the departments of ministers so that the issues of public interest are not neglected or ignored: CMO

It is not a rebellion but what the people of Maharashtra want. What does he (Sanjay Raut) mean by “bringing bodies from Guwahati”? This is not the culture of Maharashtra. He should threaten other people but not us: Shrikant Shinde, Shiv Sena MP and son of Eknath Shinde, in Thane

Shiv Sena MP Sanjay Raut on Monday said his party is ready for a “street fight and a legal battle”, ahead of the crucial hearing in the Supreme Court against the disqualification notice issued by the Maharashtra Assembly's deputy speaker to rebel party MLAs.

The bench is hearing item 7 now . Eknath Shinde's petition is listed as item number 34, reports Live Law. Matter to come up for hearing around 12:30 pm.

The Eknath Shinde-led rebel faction has claimed that the number of Shiv Sena MLAs supporting them will eventually cross 50 mark. “We will arrive at a decision in three or four days and thereafter, we will directly go back to Maharashtra,” said rebel MLA Deepak Kesarkar. Read More

The Shinde camp has made three main prayers in their petition. Here's what they have demanded:

First — Eknath Shinde has challenged the appointment of Ajay Choudhari as the Shiv Sena Legislature Party leader and rejection of their no-confidence motion against Deputy Speaker.

Third — Shinde camp has also asked for direction to Maharashtra government to provide security to the family of the rebels. Shinde has said that his other colleagues and he are receiving threats to their lives on a daily basis regarding their life and liberty.

The rebel group led by Shinde is demanding that Shiv Sena should withdraw from the Maha Vikas Aghadi alliance, which also comprises the Congress and NCP, but Sena supremo and Chief Minister Uddhav Thackeray has refused to give in and the party has now asked the dissidents to quit and contest polls again.

The Maharashtra legislature secretariat on Saturday had issued ‘summons’ to 16 rebel Shiv Sena MLAs including Shinde, seeking written replies by the evening of June 27 to the complaints seeking their disqualification.

Signed by Rajendra Bhagwat, principal secretary of the Maharashtra Vidhan Bhavan, the summons were sent to all 16 MLAs named by the Shiv Sena’s chief whip Sunil Prabhu in a letter.

Prabhu had earlier asked the rebel MLAs of the Shinde faction to attend a party meeting here on Wednesday but none of them turned up. Subsequently, the Sena submitted two letters to the legislature secretariat, seeking disqualification of 16 MLAs including Shinde.

The summons issued by Bhagwat on Saturday said that Prabhu had submitted a letter to deputy speaker of the Assembly Narhari Zirwal seeking their disqualification under The Members of Maharashtra Legislative Assembly (Disqualification on ground of Defection) Rules, 1986.