Maharashtra cabinet expansion date, time: Chief Minister Eknath Shinde and his deputy Devendra Fadnavis have been functioning as a two-member Cabinet since taking oath on June 30. 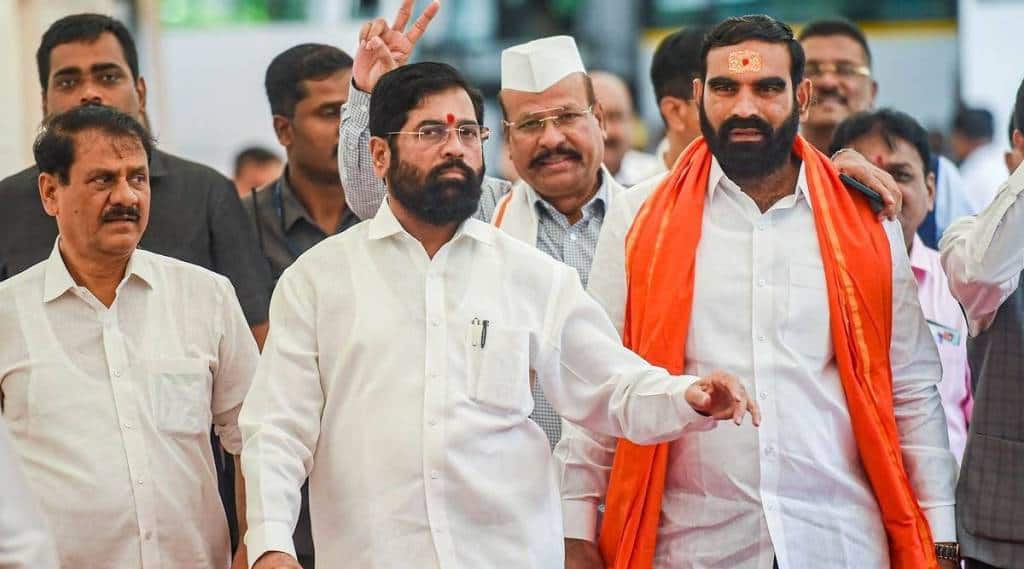 Maharashtra on Monday issued a notice announcing that the Monsoon Session of the state legislature will be held from August 10 to 18. (IE)

Maharashtra cabinet expansion news: The much-delayed expansion of Chief Minister Eknath Shinde’s Cabinet will be held on Tuesday morning, officials have confirmed, with as many as five ministers from the Bharatiya Janata Party and the rebel Shiv Sena camp set to take oath tomorrow. News agency PTI had earlier reported that at least 15 new ministers could be inducted into the Maharashtra Cabinet before August 15.

However, The Indian Express, citing sources in the ruling coalition said that five ministers from each camp will take oath on Tuesday, while a larger expansion will take place after the Monsoon Session concludes.

Meanwhile, Maharashtra on Monday issued a notice announcing that the Monsoon Session of the state legislature will be held from August 10 to 18. Officials at the Maharashtra Raj Bhavan confirmed to The Indian Express that they are preparing for the swearing-in ceremony to be held on Tuesday morning.

For over 39 days since they took oath as CM and Deputy CM, respectively, Eknath Shinde and Devendra Fadnavis have been functioning as a two-member Cabinet, drawing criticism from Opposition quarters. Shinde and Fadnavis were sworn in on June 30, but the Cabinet expansion has remained pending due to unexplained reasons.

Also Read | Kidnapped at 7, reunited at 16: The curious case of Mumbai’s ‘Girl no.166’ and miraculous happy ending

While it was earlier speculated that the expansion was delayed due to the pendency of the ongoing disqualification proceedings against the rebel Sena MLAs, Shinde and Fadnavis denied the same. However, no official reason was given for the inordinate delay in Cabinet formation.

Reacting to the criticism by NCP leader and former Deputy CM Ajit Pawar over the delay, Fadnavis said that he is saying such things out of compulsion since he is Leader of Opposition in the Maharashtra Assembly.

“Ajit Pawar is Leader of the Opposition. He will have to say such things. Ajit dada conveniently forgets that when he was in the government there were just five ministers for the first 32 days,” Fadnavis told reporters on Sunday.

On Monday, the Maharashtra legislature secretariat issued an order cancelling all holidays of employees between August 9 and 18 and directed them to be present in the office for the Monsson Session.