A bus carrying 40 people, travelling to Mandasaur from Ratlam fell into a gorge at around 10:30 am. 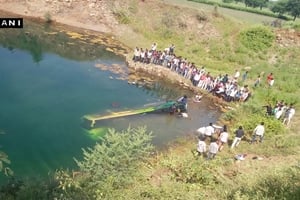 The bus was speeding its way to Mandsaur when it suddenly tripped over and fell into the gorge. (ANI)

Once the news of the unfateful; accident spread, localities reached the spot and tried to pull it out by tying it with a rope to a JCB. Some dead bodies have already been taken out, while at least 10 people have been referred to the Ratlam Hospital. The bus is said to be belonging to a local business, called the “Mamata Bus Service”. According to the injured, the driver was in a rush and thus was speeding out of his league.

Some of the victims said that the driver did not slow down despite repeated warnings and requests. It was the, that the tires burst and the bus tumbled and rolled over itself at least 6 or 7 times before falling into the gorge. The police force has been recruited at the accident site to avoid any protests or violence. Meanwhile, a crowd of people was seen taking out slogans against the city administration and expressed their frustration against the SP and the DGM.