With a sea of protesting farmers swamping Mumbai and political pressure mounting, the BJP-led Maharashtra government on Monday accepted the demands of the farmers, including their right to till forest land. 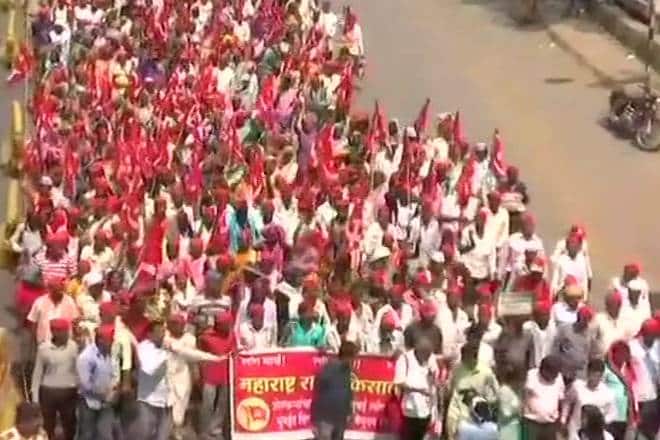 With a sea of protesting farmers swamping Mumbai and political pressure mounting, the BJP-led Maharashtra government on Monday accepted the demands of the farmers, including their right to till forest land

With a sea of protesting farmers swamping Mumbai and political pressure mounting, the BJP-led Maharashtra government on Monday accepted the demands of the farmers, including their right to till forest land. Emerging from a three-hour meeting with representatives of the All India Kisan Sabha (AIKS) at Vidhan Bhawan — Radhakrishna Vikhe-Patil of the Congress and NCP’s Dhananjay Munde and Ajit Pawar were also present at the meeting — chief minister Devendra Fadnavis said: “The government has agreed to enforce all demands made by the AIKS. The state government will accord forest land rights to tribals. It is a legitimate demand of the tribals which will be strictly implemented within six months.” The 12-member AIKS delegation expressed satisfaction and called off the protest. “We expect the government to implement all promises made in a time-bound manner,” the delegation said. This signalled a major victory for the farmers who had marched 180 km from Nashik to Mumbai over six days to press their demands. The major demands conceded include the tribals’ right to forest land, loan waiver since 2008, minimum support price for farm produce, the Narpar-Daman Ganga river-linking project, 31 water conservation projects, among others.

The government has agreed to implement the right to forest land to tribals within six months. A special task force will be constituted to implement the decision in a time-bound manner. It will apply to all tribals who have been dwelling in the forest areas up to year 2005. Another important decision taken was to waive loans of tribals with agricultural debt between 2001 and 2008. The Chhatrapati Shivaji Shetkari Sanmaan Yojna loan waiver, announced by the government earlier, was for farmers with debts from 2009 to 2016. At the meeting, it was pointed out that officials, while giving priority to a crop loan taken by a farmer’s wife, would often ignore the crop loan debt of the husband. To remove the anomaly, the government reaffirmed that loan waiver will be given up to Rs 1.5 lakh for the family unit of husband and wife, irrespective of land holding size. High on the agenda of the protesters was the recommendation of the Swaminathan Commission report to help farmers earn higher remuneration. At the meeting, the government said, “The minimum support price was the commitment of the state government. And the Centre has already made the announcement to give one and half times more than the MSP on farm produce to help farmers earn higher income.” It was also decided to set up a full-fledged State Agriculture Price Committee to regulate price mechanism and stop exploitation of farmers. To help farmers (tribals) fetch higher rates on milk sale, the government has made the 70:30 ratio mandatory — in short, higher remuneration for dairy farmers.