PM Modi’s first ‘Townhall’: Some people have set up shops in the name ‘gauraksha’

Taking his citizen outreach to a new level, PM Modi interacts with stakeholders, who have participated in MyGov initiatives, directly at an indoor stadium. 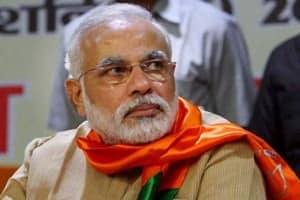 Prime Minister Narendra Modi today said his government plans to develop 300 villages across the country as growth centers for the area by creating city like infrastructure, from education and healthcare to digital connectivity. (PTI)

Ever since coming to power in 2014,  Prime Minister Narendra Modi has taken several initiatives to reach out to citizen. The launch of MyGov.in portal, monthly ‘Mann Ki Baat’ radio programme are part of such initiatives. Taking his citizen outreach to a new level, PM Modi interacts with different stakeholders who have participated in MyGov initiatives as part of his first ‘Townhall’ meeting. These include Cabinet ministers, senior officers from Ministries and Departments, government organisations, representatives from media, IT and social media industry.

Townhall is a western concept, more popular in the US and Canada. It is used by politicians as well as chief executives of companies to interact with people. In India, politicians or businessmen rarely interact with people in an open arena. Hence, Townhall is a new concept for India. At the Townhall today at Indira Gandhi Stadium Complex in New Delhi, a new PMO app to enable mobile users connect with the PM’ website will be launched. The event is being organised by MyGov to mark the second anniversary of the government’s citizen engagement platform. The meeting will be preceded by a number of panel discussions.

Here are highlights of the meeting:

7.00 pm: Some people have set up their shops in the name of gaurakhsa. Some people who do anti-social activity at night, wear veil of ‘gauraksha’ in the day, says PM at the end of the event.

6.23 pm: Our foreign policy is the policy of India first. India’s strategic interests should be safe, India should grow economically, reach across the world and third– times have changed, world is interdependent. We need to understand this and save Indian interests: PM.

6.15 pm: Should villages’ condition improve? Yes. Villages should get same benefits as cities. Under RURBAN mission we have identified 300 centres which can become economic growth centre of nearby villages. RURBAN aims to provide same facilities in villages city. They will be the growth centre of rural economy in the future.

5.57 pm: Swachhta Abihyan is an  initiative to prevent disease, and help the poor. We have to focus on preventive healthcare: PM

5.53 pm: If we grow over 8% for 30 years, everything good we see in the world will be with us. Manufacturers should target the global markets: PM

It is believed that good governance is bad politics. This is true and in many polities, government plan how will they win next election and according they plan their programmes. However, such approach doesn’t succeed: PM

There is a widespread negativity about scrutiny, check and balance, responsibility. Last mile delivery is as important as the planning. Common man’s life won’t change, if we don’t focus on good governance: PM

5.22 pm:  PM dedicates PMO Mobile APP developed by six students to the country. The app is aimed at empowering citizen. The app will have content in 10 languages. The First citizen sourced app. With the help of google, a competition was launched. The final app was selected in three stages. It gives information about even old PMs and all updates of current PM and his initiatives. PM also launches MyGov’s merchandise website. People can buy a lot of products of MyGov brand.

5.08 pm: PM Modi arrives at the venue. Some people in the audience raise slogan of “Bharat Mata Ki Jai”. PM takes part in a group photo with winners of contests on MyGov. Distributes prizes to the winners.

The Prime Minister meeting some of those people who have shared their views during #MannKiBaat programme. pic.twitter.com/xdcWVJNTrP

04.21 pm: Social media has started showing mirror to the media. All of this is leading to transparency in the country: Prasad

04.05 pm: Our government believes both in live contact as well as digital contact. India’s media landscape in changing. India is getting engaged. Engagement in development process is becoming a priority. When Digital India is happening, let there will be digital democracy as well. Then people will understand how country works: Ravishankar Prasad.

03.59 pm: PM Modi started the trend of social media use by politicans, even before he became PM. Social media empowers everyone including the one who shares information, and one who recieves. It also increases accountability: Arun Jaitley.

12.08 am: Logo of Swachh Bharat ‘Gandhi Ji’s chasma’ came through crowdsourcing  on MyGov platform. Numerous contributions have come from the initiative. Panelists who have participated in the ‘Do’ initiative of MyGov are sharing their experiences.

11.41: First session ‘Do’ begins. Stage being set for the session. The venue is free WiFi enabled. The programme will continue throughout the day.

11.40 am: Data of MyGov improving. There are 1 crore e-mail. India is changing. Country awakens, but there should be someone to keep it awake: Prasad

11.37am: Make MyGov platform for transparent governance. You can change India by the use of technology. That is the purpose of My Gov.

11.33 am: 12 crore mobile subscribers added in two years. This is more than population of France, says Prasad.