The three-day event will be an extravaganza of celebrating Indian Diaspora across the world. 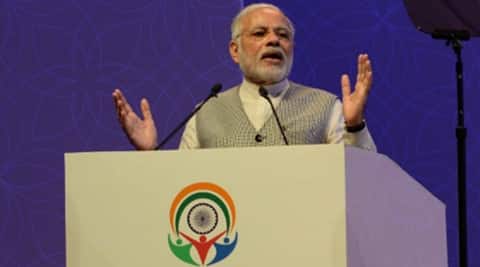 Catch this space for live updates:

#HarIndianKaMoonshot
Visit the @TeamIndus stall at #PBD2017 to learn abt their journey of becoming India’s ambassadors to the moon pic.twitter.com/FKu8aA2Zb6

It is time for Diaspora to take up the mantle of diplomacy- Ruby Dhalla, Canadian politician at #PBD2017 pic.twitter.com/AyglKfDIEM

6:56 AM: President Pranab Mukherjee will deliver the valedictory address at the 14th edition of the ‘Pravasi Bharatiya Divas’ Convention and confer the Pravasi Bhartiya Samman Awards.

8:30 pm : Prime Minister of Portugal, Antonio Costa tweets that he was proud to be the chief guest at Pravasi Bharatiya Divas Convention.

I’m proud to be the chief guest at @PBDConvention, invited by @narendramodi as the first Person of Indian Origin to lead a European country. pic.twitter.com/2QaeH7h0hS

7:51 pm : Minister of State for External Affairs, M J Akbar and Anupriya Patel, MoS Health and Family Welfare participated in the final session. The day ended with a fruitful discussion.

1.40 pm: CM of Maharashtra, Devendra Fadnavis  commences his address at the Chief Ministers’ session at #PBD2017

11.29 am: I would again encourage all PIO Card holders to convert their PIO Cards to OCI Cards: PM

11.28 am: For those workers who seek economic opportunities abroad, our effort is to provide maximum facilitation and ensure least inconvenience: PM

11.27 am: EAM @SushmaSwaraj has particularly been proactive and prompt in reaching out to distressed Indians abroad using social media: PM

11.26 am: The security of Indian nationals abroad is of utmost importance to us: PM @narendramodi @PBDConvention #PBD2017

11.25 am: NRIs and PIOs have made outstanding contributions to their chosen fields: PM @narendramodi

11.24 am: Remittance of close to sixty-nine billion dollars annually by overseas Indians makes an invaluable contribution to the Indian economy: PM

11.22 am: The welfare and safety of all Indians abroad is our top priority: PM Narendra Modi

11.09 am: Indian diaspora is our valuable partner in India’s journey of development: PM at Pravasi Bhartiya Divas

11.09 am: For my govt and for me personally engagement with overseas Indian community has been a priority: PM at Pravasi Bhartiya Divas

11.08 am: The Indian diaspora represents the best of Indian culture, ethos and values: PM at Pravasi Bhartiya Divas in Bengaluru

11.07 am: 30mn Indians abroad are valued not just for strength in numbers but respected for contributions to India & countries where they live: PM

11.04 am: Indians abroad are valued not just for their strength in numbers. They are respected for the contributions they make: PM Narendra Modi

11.00 am: The Indian diaspora represents the best of Indian culture, ethos and values: PM

10.56 am: Antonio Costa: Speaks about his ties to Goa, to which he traces his roots.

10.55 am: Portugal an attractive invest destination, can play an important role in the flow of goods to European&American markets- PM @antoniocostapm

10. 54 am: PM Antonio costa: flashes his PIO card, says he is proud to be  person of Indian origin!

10.53 am: Antonio Costa: very proud to be invited to #PBD2017, an event in which India respects its citizen living abroad

10.52 am. PM @antoniocostapm thanks delegates for the homage to Mario Soares, former PM of Portugal and icon of democracy

PM @antoniocostapm thanks delegates for the homage to Mario Soares, former PM of Portugal and icon of democracy pic.twitter.com/ZQHDV1yfbL

PM @narendramodi arrives to a roaring welcome at #PBD2017 pic.twitter.com/DyRqwTqUur

Beginning the traditional way. Dignitaries light the lamp at #PBD2017 as PM @narendramodi is set to arrive at the plenary hall shortly pic.twitter.com/f5D7fjcOUC

Will interact with the Indian diaspora at #PBD2017. Strong links with our diaspora is of vital importance for us. @PBDConvention

01:00 am: Prime Minister Narendra Modi reaches Bengaluru for the inauguration of the Pravasi Bharatiya Divas 2017.

Prime Minister Narendra Modi arrives in Bengaluru for the inauguration of the Pravasi Bharatiya Divas. pic.twitter.com/ZFuqvvxt81

11:25 pm: “India offers huge opportunities to be part of its growth story and realise your dreams through development programmes,” Minister of State for External Affairs, Gen V.K. Singh (retd.) told the diaspora on the Youth Pravasi Bharatiya Divas, earlier in the day.

10: 30 pm :  The world-renowned traditional dance-drama is performed at PBD 2017 in Bengaluru

Watch artists dancing to the tune of #JaiHo at youth #PBD2017, in Bengaluru pic.twitter.com/QRZa5nTRi1

PM @narendramodi and PM of Portugal @antoniocostapm at the Joint Press Statement at Hyderabad House in New Delhi pic.twitter.com/A2UR1d7e2a

8:10 pm : Discussions were also held on start ups, security & defence and sports. Talks on key global issues were also part of the deliberations.

6:00 pm: Antonio Costa : “It is a great honour for me to be back in India, my father’s country, as the Prime Minister of Portugal.”

It is a great honour for me to be back in India, my father’s country, as the Prime Minister of Portugal. pic.twitter.com/jQkzjI9Pfq

5:06 pm: MEA is extremely sensitive and receptive towards the problems of IndianDiaspora, it says.

4:55 pm: All issues faced by NRIs to be taken up at the sessions during ongoing PBD2017. Suggestions would also be incorporated in the policy document: MEA

2.30 pm: Union Ministers @PrakashJavdekar, @Gen_VKSingh and others at Plenary Session I of Youth #PBD2017, in Bengaluru
The youth of India will enable it to leapfrog, drive India through innovations & start-ups- @amitabhk87, CEO @NITIAayog

The youth of India will enable it to leapfrog, drive India through innovations & start-ups- @amitabhk87, CEO @NITIAayog pic.twitter.com/bxbWYZosfh

2.00 pm: NITI Aayog CEO Amitabh Kanth speaking at PBD 2017 : “One of the things that you should do while you’re in India is try the BHIMApp”

1.40 pm: “Challenge for India is not only to find solutions for its 1 bn people, but 7 bn people of the world,” says Amitabh Kanth