Lakhimpur: How communalism is creeping up on a peaceful UP town

Salim Siddiqui, 65, who fixes motorcycles in a Hindu majority area here, the headquarters of the state’s largest district of Lakhimpur-Kheri, feels the town lost its innocence since it witnessed its first communal brawl about a month back — which also spread to surrounding areas. 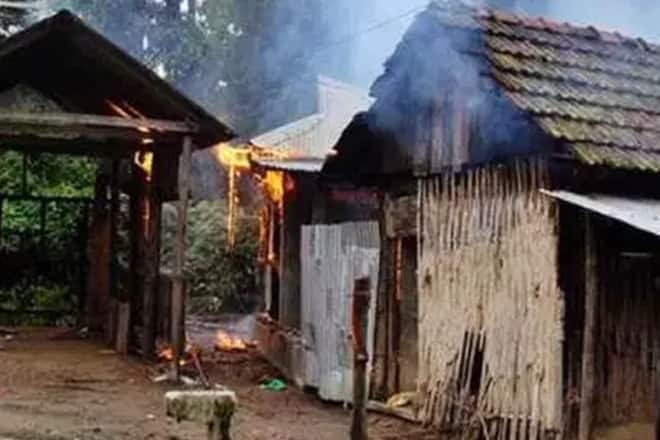 Now, as life limps back to normal, a lot, along with the state government, has changed for the town as the communal divide is clearly visible. (Source: IE)

Salim Siddiqui, 65, who fixes motorcycles in a Hindu majority area here, the headquarters of the state’s largest district of Lakhimpur-Kheri, feels the town lost its innocence since it witnessed its first communal brawl about a month back — which also spread to surrounding areas.

Now, as life limps back to normal, a lot, along with the state government, has changed for the town as the communal divide is clearly visible.

“A lot has changed… we never viewed our city with this perspective. People of both communities talk and sip tea together, but somewhere, an element of bitterness has been instilled due to that incident,” Siddiqui told this visiting IANS correspondent.

On March 2, nine days before the results of the Uttar Pradesh assembly elections were announced, communal tension gripped the city after two young men made and circulated an objectionable video of Hindu deities.

A series of incidents followed over a week. Markets were shut, personal disputes were settled through vandalism, mass arrests happened, two gun-shots were fired injuring two Hindu men, and a curfew was imposed for the next few days. Old timers say they can’t recall when a curfew was last imposed.

The young men, in their early 20s, were arrested along with several local thugs and a city-based businessman who allegedly opened fire on a mob that forced him to shut his shop.

“Muslims at large are upset that such a video was made,” Siddiqui says.

The derogatory video, many believe, was simply the tip of the iceberg while the root cause of the conflict lies in a two-year-old incident where a minor Hindu girl eloped with a Muslim man — and also about four years of muscle-flexing in the form of processions by the two communities in the city, Barah Wafat or Eid Milad-un Nabi for Muslims and Shivratri and Ram Barat for Hindus.

Speaking of the visible differences which would take time to heal, Khan was unsparing of the two youth, both class 12 students, who allegedly made and circulated the video to tease some of their classmates with whom they had had an argument.

“They were idiots who didn’t knew what they were doing… they destroyed their careers. Their parents, who were detained, had to suffer the consequences,” Khan adds.

Meanwhile, the authorities heaved a huge sigh of relief after the Hanuman Jayanti procession on Tuesday, in which an estimated 100,000 pilgrims participated, passed off without a hitch.

“Now every religious procession here is grand and what used to be friendship is now being viewed with suspicion,” said Akshay Gupta, a city-based businessman who believed that had the Samajwadi Party continued in power, there was the possibility of a full-fledged riot in city.

City-based physician Shami-ud-din Khan said that derogatory slogans raised by anti-social elements during religious processions to rile the other community has fuelled the fire of communalism in the town.

“We are now trying to ensure that people from both communities continue participating in each other’s ceremonies and functions. This helps in defusing the tension… Even during December 6 (the demolition of the Babri mosque in 1992) there was no curfew in the city, such is the moral fibre here… we will bring those days back,” the doctor says confidently.

There are many others who also believe that things will improve.

“Definitely, there is animosity due to political reasons fuelled by the muscle-flexing during processions… but we are hopeful that this would melt and people would keep religion at the personal level like they used to,” Mohan Bajpai, a socialite and devotee of city’s local deity, Sankata Mata, told IANS.

At the peak of the conflict, while District Magistrate Akash Deep took out a peace march, some devotees like Bajpai performed a yagna at a temple believing that it would bring the situation back to normal.

A month ago, when the city was tense just three days before the election results came out on March 11, Yogesh Verma, the BJP candidate from Lakhimpur, along with some locals, caught an eve-teaser who turned out to be a Muslim. The boy was beaten up and humiliated.

Verma was arrested and beaten after clashing with the police, which let the alleged offender go.

On March 11, as the election results were declared, BJP won all the eight seats in Lakhimpur-Kheri district and Yogesh Verma became the city’s new MLA. On March 13, the city marked a “saffron Holi” in the presence of paramilitary forces. Six days later, Yogi Adityanath was named the 21st Chief Minister of Uttar Pradesh.

“The animosity is still there; things have not improved much,” Verma admitted.

With the rise of the BJP and the appointment of Adityanath, people like Salim Siddiqui fear a large-scale communal incident in the near future as anti-social elements continue their provocation, like slaughtering some cows in the neighbouring town Palia a few days after Holi.

“Palia incident is just the beginning, I’m afraid that there would be more such incidents,” Siddiqui lamented.

However, many hope the rise of the BJP, headed by a Chief Minister who has promised “Sabka Saath, Sabka Vikas” (government for all, development for all), will bring with it an assurance of peace.