Eight persons were today detained in connection with the alleged gangrape of a 71-year-old nun in a convent school in Nadia district. 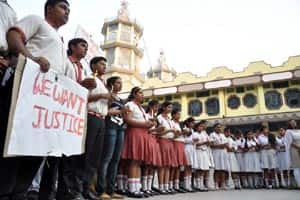 Eight persons were today detained in connection with the alleged gangrape of a 71-year-old nun in a convent school in Nadia district.

Nadia Superintendent of Police Arnab Ghosh said the interrogation of the eight persons was on and extensive searches were being conducted across the district.

The Sister Superior of Jesus and Mary’s Convent School, who is admitted to Ranaghat Hospital, is said to be stable now, hospital authorities said.

West Bengal Governor K N Tripathi hoped that the culprits would soon be arrested and the public also have a responsibility to help authorities to catch them.

“No one should insult any religious institute like this. I am sure that this government will do its best to catch the culprits”, the Governor told reporters on the sidelines of a programme in Kolkata.

Herod Mullick, state working president of the Bangiya Christiya Pariseba, a united state forum of all denominational Christians, said at Gangnapur today that the motive of the culprits was not that of robbery alone, it was an attack on the minority community.

Strongly condemning the incident, Mullick said attacks against Christians have been increasing in different parts of the state.

He claimed that the nun had sought police protection after she got life threats.

The SP had said yesterday that a study of the CCTV footage at the convent in Ranaghat subdivision had shown visuals of four persons who were allegedly involved in the crime.

The SP had also announced a reward of Rs 1 lakh would to any individual providing credible information leading to the arrest of the accused.

The nun was allegedly gangraped by dacoits at Gangnapur in the early hours yesterday after which a CID probe was ordered into the incident.The gang also decamped with Rs 12 lakh.

Chief Minister Mamata Banerjee had yesterday ordered a CID probe into the incident and promised “swift” and “strongest action” against the culprits.

Congress condemns rape of nun in West Bengal
Congress leader P C Chacko today condemned the alleged gangrape of a nun and the ransacking of a convent school in West Bengal and sought “extreme punishment” for the culprits.

“Extreme punishment should be awarded to the culprits. The governments (in the state and at the Centre) are not acting according to the gravity of the situation….Their lapses are more evident (in this case)…That is the most unfortunate part of it,” he told reporters here.

He said the anti-socials elements responsible for this should be urgently apprehended, an enquiry carried out “without any loss of time” and punishment awarded expeditiously.

A 71-year old nun was allegedly gangraped by dacoits in a convent school in Nadia district yesterday, evoking an uproar across the state. A CID probe has been ordered in the incident but no one has yet been arrested. The gang also decamped with Rs 12 lakh kept in the almirah after the crime.

More Stories on
Kolkata
Next Story
Rahul Gandhi ‘snooping’ row: BJP says it is a non-issue