Kashmir violence LIVE: The clashes between protesters and security forces in Kashmir has killed several people, even as normal life remains paralysed in the Valley. 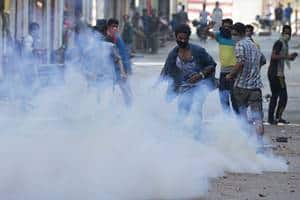 "Curfew shall remain in force in all the major towns of the ten districts in the Valley and old city areas of Srinagar city," a senior official of the provincial administration told IANS. (AP)

Kashmir violence LIVE: Following Prime Minister Narendra Modi’s call for peace in Kashmir on Tuesday, normalcy has been restored in some parts of the state. Yet, undeniably, Kashmir is yet witnessing one of the worst violence in recent times. Protests broke out across the valley over Hizbul Mujahideen commander Burhan Wani’s killing. The Separatist groups have been calling for a shutdown ever since and have extended their strike call in Jammu and Kashmir. The clashes between protesters and security forces in Kashmir has killed several people, even as normal life remains paralysed in the Valley.

1.50 pm: India should conduct an impartial probe into the use of lethal force by police during the violent protests following the killing of Hizbul commander Burhan Wani in Kashmir and ensure that basic human rights are protected, a leading human rights body has said.

12.10 pm: Mobile Internet and train services are still suspended while mobile telephony has been snapped in Kupwara are

12.00 pm: The death toll now is 34 including a policeman who was killed in mob violence. It also includes one civilian who succumbed to injuries at SKIMS Hospital this morning,” a police official said.

11.50 am; Curfew remains in force in some parts of Kashmir Valley, including Pampore and Kupwara towns, while restrictions on movement of people has been imposed in the rest of the Valley

11.45 am: Hon @narendramodi ji. After Kerala fire you carried a plane load of burn specialists with you. Please send eye/trauma specialists to Kashmir: Omar Abdullah

11.30 am: Shameless Govt should have been focused on restoring calm & on helping our doctors who are struggling to treat 1200+ injured people, Omar Abdullah tweeted

11.00 AM: Death toll in the clashes between protesters and security forces in Kashmir crossed 30

10.15 am: J&K Chief Minister Mehbooba Mufti and former chief minister Omar Abdullah pay tributes to the martyrs of 1931. ( The Kashmir Martyrs Day is observed on this day every year on both sides of the LoC to commemorate the supreme sacrifices of Kashmiri martyrs they gave this day in 1931 when the Dogra troops shot dead 22 Kashmiris in front of the Central Jail Srinagar.)

8.40 am: More than 30 people have died & all  Mehbooba Mufti & her party want to do is put up party flags & get police to ferry people to her function, Omar Abdullah tweeted.