The protests prompted calls for peace and calm both by the government and the High Court, which is now looking into the students’ plea for their right to their hijab. 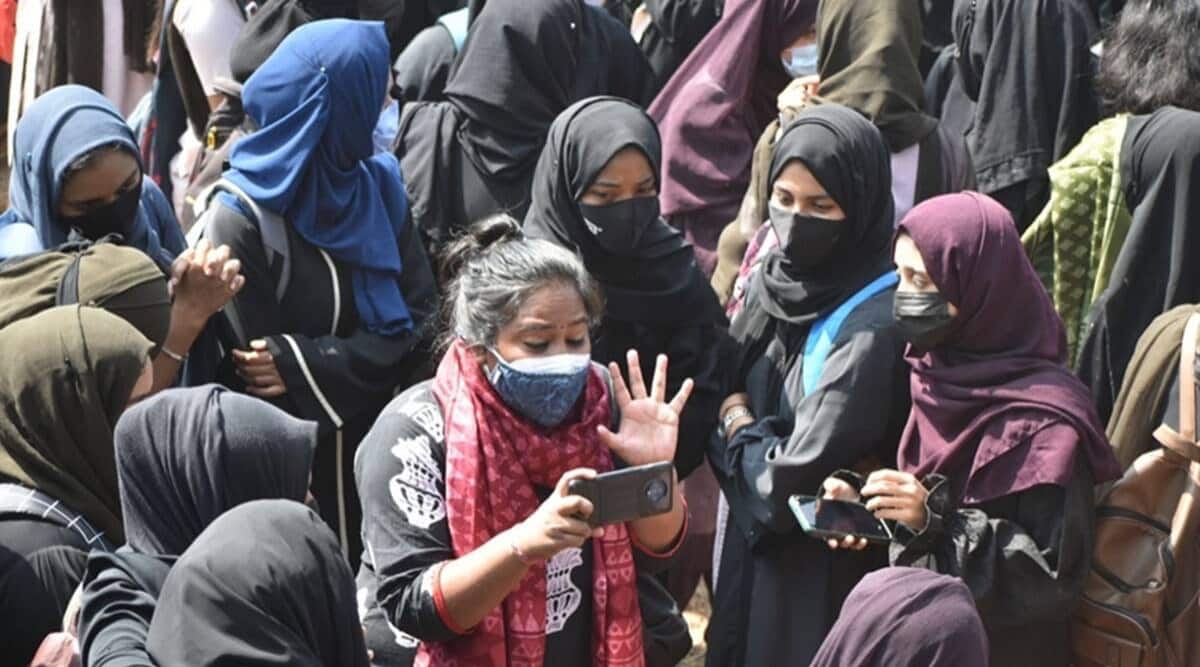 The protests prompted calls for peace and calm both by the government and the High Court, which is now looking into the students' plea for their right to their hijab.

Karnataka hijab row updates: The hijab-row triggered protests in Karnataka spread across the state on Tuesday, with campuses witnessing ‘conflict-like’ situations marked by stone-pelting incidents, use of force by police and the Muslim girls standing their ground for wearing the headscarves, prompting calls for peace and calm both by the government and the High Court, which is now looking into the students’ plea for their right to their hijab. As the issue snowballed into a major controversy, the government declared three days holidays for educational institutions across the state, even as voices across the country came in for and against the hijab issue.

Protests erupted at the Mahatma Gandhi Memorial College in Udupi after a large group of students wearing saffron stoles and headgears raised slogans in the college campus as hijab clad Muslim girls were staging a protest demanding justice. In Mandya, visuals of a group of boys heckling a hijab-clad girl went viral, even as support came pouring in for her on social media.

The matter is now being placed before the Chief Justice of Karnataka's HC for whether or not the matter should be referred to a larger bench…The matter has to be decided & disposed of as soon as possible as students are suffering from this issue: Advocate Abhishek on hijab row

Telangana: Women staged a demonstration at the Ujale Shah Eidgah, Saidabad in Hyderabad to extend their support to the girls protesting to wear hijab in Karnataka

Since the court has not passed any order to provide interim relief to the students, the Govt notification (with regard to dress code) will continue to remain in effect. Uniform is compulsory for students to attend classes: Karnataka Education Minister BC Nagesh

There is no controversy over (the wearing of) hijab in Madhya Pradesh. No proposal is under consideration of the state government regarding hijab ban. So, there should be no confusion in this regard: Home Minister Narottam Mishra

Where there is a prescribed uniform in schools/colleges, it should be followed. Only education should be the focus at centers of education. Religious or political issues should not be brought to schools/colleges: Maharashtra Minister Aaditya Thackeray on Karnataka hijab row

It's a woman's right to wear whatever she wants, be it bikini, hijab, saree, jeans or 'ghoonghat'. No one has the right to tell a woman what to wear. There shouldn't be any politics on this: Congress leader Priyanka Gandhi Vadra, in Lucknow

Karnataka hijab row live updates: No one can take law and order into their hands. Govt will not spare any miscreant, says BC Nagesh, Karnataka Primary & Secondary Education Minister on hijab controversy

“Students wearing hijab along with uniform for so many yrs. In some educational institutes colour of headscarf prescribed.. Deliberately manufactured to cause division & arouse communal sentiments: CPM MP Elamaram Kareem writes to Education Minister Dharmendra Padhan for urgent intervention

Government should resolve Hijab controversy, Opposition parties should not use it for political gains: Mallikarjun Kharge

Karnataka hijab row live updates: Young students have been reduced to shouting their religious slogans. Whether it is Jai Shri Ram or Allahu Akbar, do stop, pause and think what a student life is reduced to. Don’t celebrate either, there is nothing brave in becoming defenders of religious identities. Saddening.

A meeting of the Karnataka state cabinet to be held at Vidhana Soudha in Bengaluru today at 11 am.

The Karnataka High Court will on Wednesday resume the hearing of petitions, filed by students of the Government Pre-University College for Girls, Udupi, challenging Hijab ban inside classrooms.

The row has also taken a political colour, as the ruling has BJP stood strongly in support of uniform related rules being enforced by educational institutions, calling the headscarf, a religious symbol, while the opposition Congress has come out in support of Muslim girls.