Karachi terror attack: In the latest terror attack in Pakistan’s Karachi city, at least 43 people from minority Shia Ismaili community were massacred in their bus today. 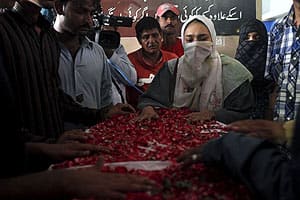 Relatives mourn near the coffin of Saulat Mirza, who was sentenced to death by anti-terrorism court in 1999 for killing three people and hanged on Tuesday, after his body arrived in Karachi, Pakistan, May 12, 2015. According to local media, Saulat Mirza who was convicted for murder was hanged to death at Balochistan's Machh Jail on Tuesday. Mirza had been on death row for nearly 17 years. Sentenced to death in 1999, he was initially scheduled to be executed on March 19 this year after Pakistan lifted its moratorium on capital punishment in the wake of the Peshawar school massacre. He was buried in Gulshan-e-Maymar neighbourhood in Karachi. REUTERS

Heavily-armed militants donning police uniforms attacked a bus today carrying Shia Ismaili Muslims and shot them in the head, killing at least 47 people and leaving behind a pamphlet of ISIS claiming responsibility for the grisly attack in Pakistan’s port city of Karachi.

Police officials said it appeared that six to eight assailants on motorbikes first opened fire on the bus just near the Dow Medical College and then entered the bus when it stopped at Safoora Chorangi, Gulistan-e-Johar area of Karachi.

The attackers killed 47 people, including 16 women, and wounded more than 20 others before fleeing from the scene.

The attack in Karachi is deeply saddening & utterly condemnable. Our thoughts are with the families of the deceased.

The death toll could further rise as some persons are seriously injured. The injured and dead were shifted to various hospitals by rescue workers.

A senior police official said the attackers entered the bus and shot the passengers in the head.

A blood-stained pamphlet of terrorist group Islamic State was recovered from the scene, according to a police official.

But government has not so far named any group for the attack.

A rescue official quoted a victim as saying that the attackers were dressed in police uniforms.

Jamali said initial investigations showed that the armed men used 9mm pistols in the massacre. Empty bullet shells of pistols and Kalashnikovs were found at the scene.

This was the worst attack targeting the members of the minority community after a suicide bomber in January blew himself up in a Shia mosque in Shikarpur in the Sindh province killing 61 worshippers and bystanders.

A senior police official said the bus belonged to the Al-Azhar Garden welfare, a non-profit organisation for the Ismaili community which provided them low cost housing just near the site of the attack and free transport service.

“Most of these people were going towards the city centre for jobs or were vendors or small traders,” the official said.

Police and Rangers arrived at the scene and started manhunt. More than 60 people were on the board the bus.

Ismaili community is a branch of Shia Muslims and they are known for their progressive Islamic views.

President Mamnoon Hussain and Prime Minister Nawaz Sharif have strongly condemned the terrorism incident. Sharif sought a preliminary report from the authorities on the incident.

The attack came a day after Sharif’s Kabul visit where he said that enemies of Afghanistan are also enemies of Pakistan.

The Director-General of the ISPR tweeted that Army Chief General Raheel Sharif had cancelled a pre-schedule three-day visit to Sri Lanka because of the attack.

Sindh Chief Minister Syed Qaim Ali Shah termed it a “terrorist attack” and said the culprits will be arrested and justice will be done.

He announced Rs 500,000 compensation for the dead and free treatment for the injured.

Pakistan has seen a rise in sectarian violence in recent years particularly against minority Shias who represent around 20 per cent of the country’s Muslim population.

Prime Minister Narendra Modi today condemned the attack in Karachi in which people from minority Shia Ismaili community were targeted and said India stands firmly with the people of Pakistan in this hour of grief.

“The attack in Karachi is deeply saddening and utterly condemnable. Our thoughts are with the families of the deceased,” he said.

“We stand firmly with the people of Pakistan in this hour of grief. I wish all those injured a quick recovery,” the Prime Minister said.