Khushboo: Joined Congress because of my sensibilities

Actor-politician Khushboo who recently joined Congress after quitting DMK, today said she had joined the party because of her ‘sensibilities’… 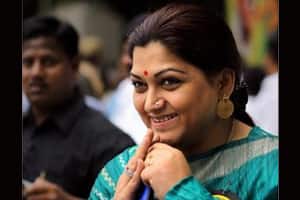 Actor-politician Khushboo who recently joined Congress after quitting DMK, today said she had joined the party because of her ‘sensibilities’ and her belief that only this party could bring about unity among various castes and creeds.

Stating that she would work at the grassroot level as a party functionary and not as an actress, she said her decision to join Congress was “due to my sensibilities and my dream of a secular India.”

The actress noted that though she is a Muslim, she had not changed her caste (after marriage). “At the same time, it is not about religion. But when my country says there has to be unity despite various castes, creeds and colors, only Congress can do that”, she told reporters here.

Asked whether she was looking to rise through the ranks in Congress, she said she was not hankering for any post and was there to work for the party. “Senior leaders and (AICC President) Sonia Gandhi and Rahul Gandhi know me well. They know what position will suit me”.

Elangovan said the Congress would use Khushboo’s services across all states.

When it was pointed out that Congress had garnered less than five per cent vote share in the 2014 Lok Sabha polls, the actress said winning and losing is common in politics. But that held true not only for Congress,but for other parties too.

To a question, she declined to draw a parallel between Congress and DMK, saying getting into politics should be done wholeheartedly and not “influenced” by someone.

“It should come whole heartedly. (Congress) party is open. We are ready to welcome anyone. I have received such a warm welcome and anybody interested to join the party should do so of their own interest.People cannot be influenced to come into a party. It has to come from within.”

“More than one lakh people were rehabilitated (during the UPA-led Congress rule). There is a perception that Congress is against Sri Lankan Tamils. No, it is wrong. We are against terrorism. we will fight against terrorism”, she said.

Known for her penchant for making controversial remarks like the one on pre-marital sex, Khushboo quit the DMK on June 16, saying she was slighted by the party leadership.

She joined the DMK in May, 2010 when it was the ruling party in Tamil Nadu.

Khushboo has acted in over 200 films, soap operas and hosted television shows in Tamil satellite channels.