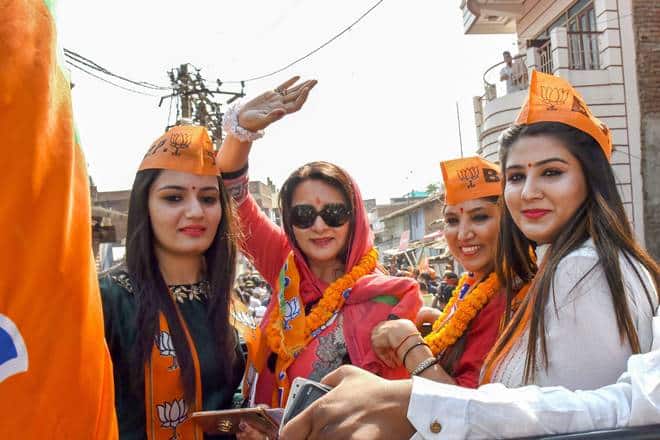 Daltonganj: Actress Poonam Dhillon at a road show in support BJP candidate Aruna Shankar who contesting for the post of Mayor, in Daltonganj on Saturday (April 14, 2018)

Jharkhand municipal elections 2018 (Jharkhand Nagar Nikay Chunav 2018) results LIVE updates: Counting for the civic polls results in Jharkhand is underway. BJP, Congress and JMM are fighting for Mayor and Deputy Mayor posts. The counting of votes for 34 local bodies of the state commenced at 8 am and results are set be out by the afternoon, according to the State Election Commission (SEC). Polling was done on April 16 for five Municipal Corporations (Nagar Nigam), 16 Municipal Councils (Nagar Parishad) and 13 Nagar Panchayats. As per SEC, voting percentage for the Ranchi Municipal Corporation was 49.3. This was higher than the 34.13 per cent voting recorded last time. For the first time, the civic body polls have been held on party lines the state. BJP, Congress, Jharkhand Mukti Morcha (JMM) and others have fielded candidates for posts of Mayor and Deputy Mayor.

3: 00 pm:  BJP has one 20 Mayor/Chairman posts and 16 Deputy posts in Jharkhand Municipal Elections and Bye-elections that were held for 34 and 4 local bodies respectively.

2:00 PM: Results of these elections are crucial ahead of the 2019 Lok Sabha elections. 14 Lok Sabha seats will be up for grab.

1:15 PM: News are coming from Ranchi that Bharatiya Janata Party (BJP) is leading on both Mayor and Deputy mayor posts of the city’s Municipal Corporation. In a big development, Congress has now giving tough competition for the Deputy Mayor post. JMM is second on Ranchi Mayor post.

10:55 AM: Breaking news from Ranchi. Close fight continues between BJP and JMM. Outgoing Mayor of BJP Asha Lakra was initially trailing to JMM’s Varsha Garhi, has taken lead after second round of counting of votes

10:50 AM: Meanwhile, Congress supporters are protesting in in Chirkunda Nagar Parishad in Dhanbad. They have demanded recounting of votes. BJP candidate has already won the Chairman’s post

10:40 AM: BJP candidate was ahead on the Deputy Chairman post in Saraikela Nagar Panchayat. Congress nominee has been leading on Chairman post

10:25 AM: Jharkhand Mukti Morcha was leading on Ranchi Mayor post which was held by BJP. All Jharkhand Students Union (AJSU) Parrty is ahead in Adityapur

10:10 AM: BJP has candidates have bagged both Chairman and Deputy Chairman posts in Khunti Nagar Panchayat. According to reports, BJP candidate Arjun Pahan has won Chairman’s post.

10:05 AM: Close fight is going on between BJP and Congress in Saraikela Nagar Panchayat. The BJP candidate has gained lead on the Deputy Chairman post . Congress is ahead on Chairman post here.

7:10 am: It has been learnt that polling was held in 34 civic bodies. Number of voters were 22 lakh. Apart from 34 civic bodies, elections were held in Bishrampur, Dhanbad, Jhumri Tilayya and Deoghar. 278 candidates were contesting for Mayor and Chairman seats, 320 were in the fray for Deputy Mayor and Vice chairman, 122 candidates have contested for Mayoral and Presidential posts and Deputy Mayor and Vice President posts witnessed contest between 23 candidates.