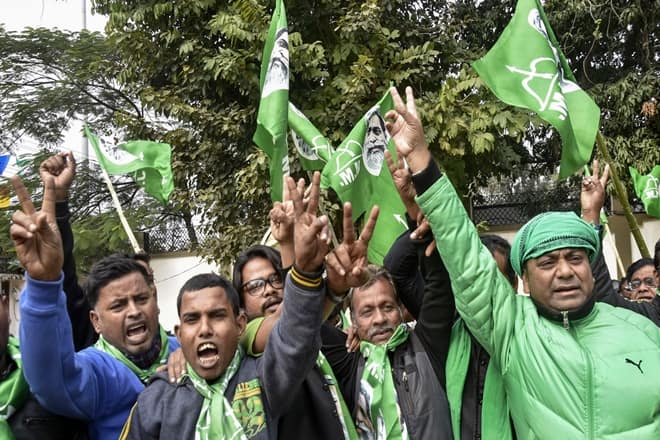 Less than seven months after it stormed back to power at the Centre with its highest tally in the Lok Sabha elections, the ruling BJP was swept out of power on Monday in Jharkhand by the coalition of JMM, Congress and RJD, led by their chief ministerial candidate and JMM chief Hemant Soren.

For the BJP, the defeat in Jharkhand is the loss of power in the fifth state in a year following the fall of its governments in Madhya Pradesh, Chhattisgarh, Rajasthan and Maharashtra.

CM Raghubar Das and many of his Cabinet colleagues were staring at defeat with the JMM-Congress-RJD alliance surging ahead in the counting of votes, winning or leading in 46 seats in a House of 81. By evening, the BJP was ahead in just 25 seats.

The people of Jharkhand, Soren told reporters, have given a clear majority to the alliance, signalling the start of a new chapter which will be a milestone. “I promise people of every community that their hope will not be broken,” he said. Counting trends showed that the JMM, which contested 43 seats, was ahead in 30, the Congress in 15 and the RJD in one. Former BJP ally AJSU and Babulal Marandi’s JVM (Prajatantrik) were ahead in 3 seats each. Prime Minister Narendra Modi congratulated Soren on the victory of the alliance. “Congratulations to @HemantSorenJMM Ji and the JMM-led alliance for the victory in the Jharkhand polls.

Best wishes to them in serving the state. I thank the people of Jharkhand for having given @BJP4India the opportunity to serve the state for many years. I also applaud the hardworking Party Karyakartas for their efforts. We will continue serving the state and raising people-centric issues in the times to come,” he said on Twitter.

Union home minister and BJP president Amit Shah, in a Twitter post, said he respected the mandate of the people of Jharkhand. He, too, thanked his party workers.

Trailing by more than 10,000 votes in Jamshedpur East against BJP rebel Saryu Roy, chief minister Raghubar Das took the blame for the loss of Jharkhand. “It is not BJP’s defeat, it is my defeat,” he told reporters. Incidentally, in Jamshedpur West, from where Das won the last election, Banna Gupta of the Congress was leading by more than 20,000 votes.

For the Opposition phalanx, the victory in Jharkhand, coming as it does after the improved Congress showing in Haryana and the unexpected turn of events in Maharashtra where the BJP eventually lost power, has come as a big boost. The verdict sends out a signal, again, that the image of Prime Minister Modi, despite his popularity, has limitations as a mascot when it comes to state elections. The BJP has not won a single big state conclusively in the last one year. While the Congress had routed it in Chhattisgarh and defeated it narrowly in Rajasthan and Madhya Pradesh in December 2018, the BJP could not cross the half way mark in Haryana where it was in power and failed to form the government again in Maharashtra.

It suffered humiliating defeats in Odisha and Andhra Pradesh as well which went to polls with the Lok Sabha earlier this year. The big signal — the BJP, as an incumbent in states, struggles to return to power.
The BJP now governs just 35% of the country’s landmass against over 71% during its peak in 2017 when it was in power in all the heartland states.