The police and administration are keeping a close watch on miscreants trying to use the social media to spread rumours. Internet services have… 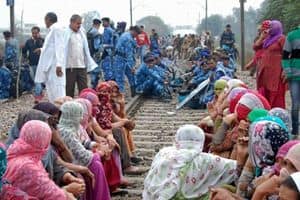 The Jat community has served a 15-day ultimatum to the Haryana government for implementation of reservation.(PTI)

The renewed Jat agitation for job reservation and other demands continued in Harayana for a second day on Monday but on a subdued note.

Despite a blistering heat wave, protests were staged at a dozen places in some districts, dominantly in Rohtak and Hisar.

Fifty-five companies of paramilitary forces and hundreds of Haryana Police personnel kept a close watch on the Jat protestors.

In some districts, no sit-in protest was staged. At some places, those on dharna submitted memorandum to the Deputy Commissioner and ended the protest.

The police and administration are keeping a close watch on miscreants trying to use the social media to spread rumours. Internet services have been suspended in some districts.

The Haryana Police booked several people for violation of prohibitory orders on assembly of five or more people and on charges of spreading rumours through social media.

The Punjab and Haryana High Court recently stayed a notification of the state government granting reservation to Jats and five other communities. The Haryana assembly had passed a legislation giving them quotas.

At least nine of the 21 districts in Haryana were on high alert on Sunday as a section of the Jat community renewed its agitation for reservation.

The Jat community has served a 15-day ultimatum to the Haryana government for implementation of reservation.

The call for the renewed agitation has been given by the All India Jat Aarakshan Sangharsh Samiti (AIJASS).

Reports said the agitators started their agitation in rural areas instead of towns this time.

Haryana saw the worst violence in its five decades of existence in February during the Jat agitation for reservation.

As many as 30 persons were killed, 320 others injured and property worth crores was destroyed during the agitation. The state remained paralysed for nearly 10 days.