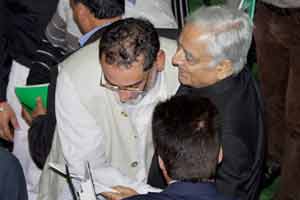 Jammu and Kashmir Chief Minister Mufti Mohammed Sayeed on Monday termed the PDP-BJP government as a model of unity in diversity and stressed that partnering with strong Centre was in the state’s interest to put it firmly on the path of peace, development and self-reliance.

The Chief Minister, during his hour-long speech in reply to the Motion of Thanks to the Governor’s address in the Legislative Council, said the new government has been given a rare opportunity by the people to provide a transparent and smart government in collaboration with the strong NDA Government at the Centre.

“Our Common Minimum Programme is in the public domain. We will fulfil wishes and aspirations of all the people, for which we need an enabling atmosphere that promotes peace in the region,” he said.

Sayeed stated that Prime Minister Narendra Modi has a massive mandate to rule India, and PDP has formed an alliance with BJP to script a new era of development and good governance in the State.

“This is not a fractured mandate but a verdict to integrate Kashmir with Jammu and Ladakh and connect J&K with the rest of the country,” he said, adding the new government will facilitate and initiate a sustained and meaningful dialogue with all the stakeholders in the State.

Urging India to take a lead in engaging all SAARC countries, including Pakistan, in the dialogue process to usher in a new era of reconciliation, Sayeed said “the PDP-BJP government in J&K has the legitimacy it requires to fulfil the wishes and aspirations of the people who voted with great hope and expectations.

Describing former Prime Minister Atal Bihari Vajpayee as a great statesman who seized the opportunity in Kashmir to extend a hand of friendship to Pakistan, the Chief Minister said “New Delhi has to take a leaf out of his vision by writing a new chapter with its western neighbour, which is the only bottleneck in ending perpetual conflict in the region that has denied the people the rich dividends of peace.

“We can change friends but not neighbours,” he said and called upon Pakistan to reciprocate to the positive steps that the Government of India has taken to bring peace in the region.

Emphasising on protecting the special status of J&K as it gives the people of the State a unique place in the country, Sayeed said, “the peace-loving people of the State rejected the Two-Nation Theory and acceded to India, which gave it a special place in its Constitution.”

He said the people living in all the three regions of the State should cherish this unique position that has been given to them. Referring to J&K’s great record in maintaining bonds of amity and companionship, the Chief Minister remembered Mahatma Gandhi when, in 1947 amid bloodshed of Partition, he described J&K as a shining example of secularism.

Stating that the purpose of the alliance with BJP is to give people a stable and representative Government, the Chief Minister said the coalition partners will strike the right balance and create an atmosphere of peace in a region that has seen strife and conflict for more than two decades.

“This is a decisive mandate of people – during parliamentary elections we had got lead on 41 seats but when the Assembly elections results were announced we got 28 seats, NC 15 and Congress 12. It was a fractured mandate. The first message that I got from Congress high command followed by Ghulam Nabi Azad”, he said.

“The then Chief Minister Omar Abdullah announced full support to PDP in press conference and had sent DGP and Chief Secretary to me for responding to him. Azad also telephoned him over government formation. Then Omar sent a message for grand alliance,” he added.

“But I found an opportunity in this fractured mandate. I felt that it is connecting north pole with south pole. The former Prime Minister V P Singh used to say that politics is art of possibility,” he said, adding he found an opportunity in this to connect the regions — when we cannot connect people of Jammu, Kashmir and Ladakh with each other how can we connect people of J&K with rest of the country”.

“But in 2002 we lost an opportunity to connect and this is the opportunity that I have got and I want to catch bull by horns even my party turns stone faced what is Mufti talking how can he go with BJP to form the government even Mehbooba oppose it”, he added.

“This is a historical moment for us– since 1947 this is again a moment and opportunity for J&K. This is an opportunity to come to us after 1947″, he said, adding when the mahyem and killings were going on across the sub-continent Jammu and Kashmir was shining example of communal harmony and brotherhood and it was J&K which became shield for Indian muslims to survive and we are the same people who have rejected the two nation theory of Jinha”.

“I want to recreate and revive that atmosphere. The people of Kashmir are looked with suspicion and my agenda is to ensure that the needle of suspicion and mistrust is removed”, he added.

“The purpose of alliance we have put certain conditions on the government formation. It was reconciliation with your neighbour — I have been more than happy if we will have good relations with Pakistan and that will start peace and normalcy in the state.

The Chief Minister stated that all lands other than those given to the security forces on the basis of lease, licenses and acquisition in which due process of law has not been followed, shall be returned to the rightful owners, except in a situation where retaining the lands is absolutely imperative in view of specific security requirement.