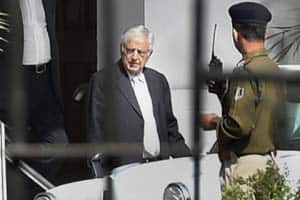 Jammu and Kashmir Chief Minister Mufti Mohammad Sayeed passed away on Thursday. He was admitted with complaints of fever and neck pain on December 24 after which the doctors at AIIMS diagnosed him to have sepsis, decreased blood counts and pneumonia. (Photo: PTI)

Pakistan should control terrorism if it wants peace and reconciliation, Jammu and Kashmir Chief Minister Mufti Mohammad Sayeed today said, while terming the terror attacks in Kathua and Samba as a “conspiracy” to derail the peace process.

Condemning the terror attacks, he said the people of the state have a strong resolve and some terrorist attacks will not deter them.

“If they (Pakistan) wants peace, reconciliation, Pakistan PM Nawaz Sharif, its establishment must control them (terrorism),” he told the Jammu and Kashmir Assembly after opposition created a ruckus demanding adjournment of the question hour.

“The peace that was witnessed by the state after 2003, similar peace will return to Jammu and Kashmir, same peace will be restored and the forces which are doing this (such attacks) that we should send a message from the House …Pakistan is also a victim and their Prime Minister says he cannot do anything to control this,” he said.

He said during the tenure of former Pakistan President Pervez Musharraf “peace prevailed” on both sides of the border and Line of Control.

The Chief Minister again termed the terrorists from across the border as “non-state actors” and asked, “Who were the people who attacked churches in Karachi, who launched attacks in Peshawar, who is Lakhvi.”

Mufti had said on Friday held non-state actors responsible for the attack on the police station in Kathua.

The Chief Minister said the terror attacks that took place in Kathua and Samba in the last 48 hours were nothing new as such type of attacks have been happening for long.

He also noted that Pakistan itself was a victim of extremism.

“They (terrorists) are not being taught Islam, I don’t know what they are being taught so they go out to kill people. When I took over as the chief minister for the first time they launched an attack on the Raghunath Temple in Jammu.”

He said in the past two three years such attacks have taken place with even heads being decapitated on the borders.

Congress Legislative party leader Nawang Rigzin Jora wanted an explanation from the chief minister as to why he termed the terrorists as “non-state actors.”

“Why do you call terrorists non-state actors” Jora asked to which Mufti replied, “Those who attack Churches, those who attacked Pesahwar, Lakhvi what are they.”

Mufti said the House must show a unified face in the wake of such attacks and pass a resolution condemning such attacks in a unanimous voice.