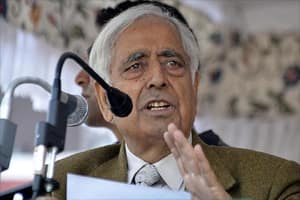 A new coalition government headed by People’s Democratic Party (PDP) veteran Mufti Mohammed Sayeed today took over the reins of power in Jammu and Kashmir, marking the maiden entry of Bharatiya Janata Party (BJP) in the state government which promised to maintain status quo on Article 370, a departure from the saffron party’s stated position.

Ending 49 days of Governor’s rule in the state, the swearing-in ceremony, in which 25 Ministers of Sayeed cabinet were administered oath of office and secrecy by Governor N N Vohra, also saw separatist-turned-politican Sajjad Lone taking oath as a Cabinet Minister in the BJP quota.

The function was attended by Prime Minister Narendra Modi who wished Sayeed and his team, saying “PDP-BJP govt is a historic opportunity to fulfil the aspirations of the people of J&K and take the State to new heights of progress.”

Nirmal Singh of BJP, who will be the new Deputy Chief Minister of the state, was second after Sayeed to take oath. In all, 13 MLAs including Sayeed from the PDP and 12 MLAs from BJP and Peoples Conference combine were sworn-in as ministers.

The ceremony was boycotted by National Conference and majority of Congress leaders and MLAs. However, Congress state unit chief Saif-ud-din Soz, who is speculated to be on his way out, attended the function held at Zorawar auditorium of Jammu University.

After the ceremony, Sayeed and Singh jointly addressed a press conference where they released the 16-page “Agenda of the Alliance” in which both parties agreed to maintain status quo on Article 370.

It said the “present position will be maintained on all Constitutional provisions including special status.” BJP’s national agenda seeks scrapping of this Article.

“PDP and BJP have entered into the governance alliance based on the agreement and agenda which is an effort towards seeking national reconcilation on Jammu and Kashmir”, the Agenda document said.

While the PDP-BJP government promised to examine the need for denotifying disturbed areas with regard to AFSPA, no time-frame was mentioned in the Agenda document regarding removal of the controversial law.

While PDP in its poll manifesto earlier had sought “de novo examination” of issues relating to notifying of ‘Disturbed Areas’ thereby paving way for withdrawal of AFSPA, BJP had been opposed any such idea.

Asked at the press conference whether he was dissasisfied as no agreement was reached on scrapping of AFSPA, Sayeed said “I am not at all disappointed. I am, as the Chief MInister, the Chairman of United Command (UHQ). I will make them accountable. Mujhe maloom hai kaise mahaul ko banana hai (I know how to create the situation).”

The document said the Sayeed government will take measures for sustenance and livelihood of West Pakistani refugees and work out one-time settlement of refugees from Pak-occupied Kashmir in 1947, 1965 and 1971.

Sayeed’s swearing-in as the 12th Chief Minister brought an end to 49 days of Governor’s rule imposed on the state since the resignation of Omar Abdullah as chief minister after being voted out of power last December.

It also marked Sayeed’s return to the top post after nearly a decade since having led a PDP-Congress coalition government for three years from January 2002.

Lal Singh, who switched sides from Congress to the BJP just before the elections, took oath in Dogri language.

The cabinet saw entry of separatist turned politician Sajjad Gani Lone being sworn-in as the cabinet minister from the BJP quota.

After the swearing-in, he received a tight-hug from the Prime Minister.

PDP legislator Haseeb Drabu, who was the chief negotiator from the party in formulating a Common Minimum Programme (CMP), was welcomed by the Prime Minister with all hugs and smiles for making the alliance possible.