149 persons were detained in Madurai district for staging protests against the ban and bulls were also seized. 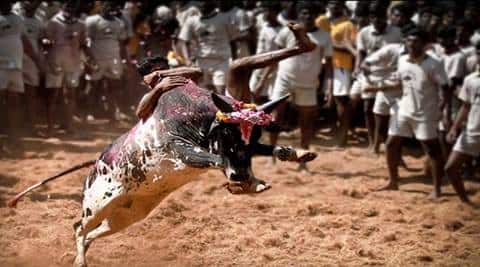 Jallikattu was reportedly held in Madurai, Dindigul, Nagapattinam, Coimbatore, Salem and Tirpur in Tamil Nadu on Saturday and Sunday, according to a report in ANI. Jallikattu a sport played with cattles such as bulls was banned by SC on Thursday. Protests broke out amongst all social sections of the state and Jallikattu was organised. People were arrested by police, said some reports and bulls were also seized.

Whereas, SC has banned the sport since last year and is supported by many animal NGOs like People for Ethical Treatment for Animals (PETA), villagers believe that they do not understand the religious significance of the sport. The sport looks like the bulls are being pushed, pulled and beaten during the match so as to be tamed. In Vadam Jallikattu, the bull is tied using a long rope and many would gather around it to tame it. In another version of the sport, a black cloth is tied on the horns of the bulls and people hold it and pull the bull.

Huge rallies took place across the state and organisers reportedly also vowed to hold Jallikattu at Azhagumalai near Pongalur on January 17. Yesterday, 149 persons were detained in Madurai district for staging protests against the ban. The Supreme Court on Thursday had said it could not give its verdict on Jallikattu before Pongal. DMK Working President M K Stalin had led a protest in Chennai on Friday in this regard, according a PTI report.