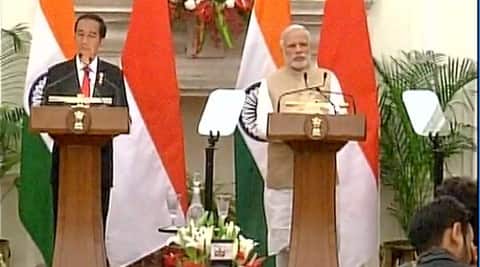 PM said that meeting focused on the full range of bilateral cooperation. He told media that both sides agreed to prioritise defence and security cooperation, besides enhancing efforts to ensure safety and security of the sea lanes. “As the world’s most populous Muslim nation, Indonesia stands for democracy, diversity, pluralism, and social harmony. These are also our values. Our nations and societies have nurtured strong bonds of commerce and culture throughout our history,” he said.

The Indonesian President was given a ceremonial reception at Rashtrapati Bhawan this morning, following which he met President Pranab Mukherjee and Vice President Mohammed Hamid Ansari. Widodo arrived in New Delhi last tonight on a two-day visit to India. This is his first visit to India after assuming power in October 2014. President Widodo is accompanied by a high level delegation including several cabinet ministers, senior officials and a 22 member business delegation.